Two-wheel drive BTRDA National Rally series front runner Rhys Yates has confirmed his intentions for the 2016 season this week, by purchasing one of the leading four wheel drive cars in the world, a Ford Fiesta R5.  After a year’s sabbatical, the MSA British Rally Championship (BRC) returns next year and Yates will campaign the Brettex Site Services backed machine in the BRC1 class in a bid for overall honours.

The 23 year old Chesterfield driver has successfully campaigned a Fiesta R2 in the REIS-Ravenol BTRDA and MSA English Rally Championships this season and is currently leading the ultra-competitive Silver Star rankings. His transition to rallying in 2014 from his career as a British Junior Moto X rider has been a successful one and Yates is looking to further his experience at the top level of British Rallying as soon as possible. The return of the British Rally Championship in 2016 was the ideal opportunity to progress into one of the M-Sport built 1600cc turbo cars.

“Our year in the BTRDA was always about gaining experience of different types of events and of course valuable time behind the wheel” says Yates. “With the BRC returning next season we had been planning on the next move for some time and thanks to the purchase of an R5 by our main sponsor Brettex Site Services we can keep moving up the ladder rather than staying still. The new format of the series is appealing and I know it will be really competitive out front which will give me a real indication of my progression I can’t thank Brettex enough for this amazing new opportunity.”

The car will be arriving next week (W/C 20th September) from Poland and although Yates is keen to get as much mileage under his belt before the 2016 season in the new steed, he still remains focused on his BTRDA title aspirations.

“I don’t want to jeopardise my championship chances so I will be going to the Trackrod Rally Yorkshire in the R2 Fiesta to give me the best chance of taking the win this year.  It would great for our backers if we can tie up the title in Pickering and then we can look at any remaining events to debut the car. It’s really exciting to have the opportunity to pilot a front running car in the BRC next year but I need to concentrate on the task in hand for the moment”.

Yates is supported by Brettex Site Services, Pirelli and PIAA. 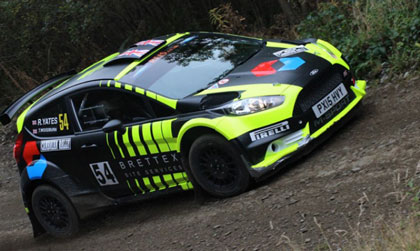