Rhys Yates looking for progression in 2017

Having completed just 18 events before his BRC debut, Yates took the plunge and joined the new-look series, with the Ford Fiesta R5 driver finishing tenth in the standings in 2016 – his best result coming on the Circuit of Ireland with a fine sixth.

“Last season was a massive learning curve as we didn’t know what to fully expect heading to Mid Wales,” said Yates. “Jumping from an R2 car to an R5 was a big step but one I am pleased we did.

“We are a family run team and that means you have to do a lot more than driving which perhaps meant I didn’t do as well as I had hoped on some events. By getting a good team around me, led by the brilliant Andrew Smith at the end of the year I could focus a lot more on the driving, preparation and recceing and I think that showed in our stage times and competitiveness as well.”

Looking ahead to the new season, Yates will be joined by new co-driver, Carl Williamson. The Chesterfield man goes into 2017 with a different mindset compared to one year ago.

“It was quite strange doing the Cambrian at the weekend. A year ago that was a big challenge where as now it was very laid back and relaxed as the BRC has really moved me on as a driver and it has already given me further goals.

“I want to get as much seat time in as possible before the Border Counties – you just can’t beat it. Working with Carl and all his experience is great as it is helping me with set-up which was one thing I struggled with last year. I wasn’t fully comfortable which meant I couldn’t push as much as I would have liked.”

Yates progressed strongly over the seven-round series, struggling on round one but setting top three stage times on the Isle of Man – mixing it with the BRC’s best. More of the same is hoped to be on the agenda as the Brettex-backed driver is eager to get going and improve.

“My goals are always moving and have nothing completely set in stone. Priority number one is to improve my championship position – top five would be really nice.

“As regards to events, I would love to be setting decent times on both surfaces and finishing in the top five on gravel and really pushing on for a podium on the Tarmac. I think it’s realistic and I cannot wait to get going once again.” 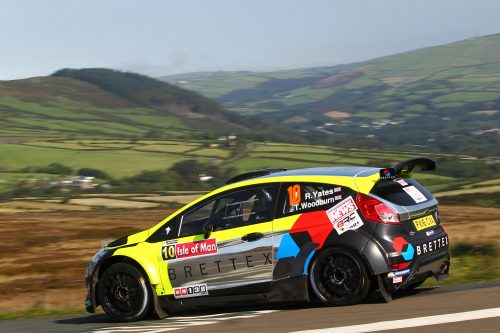