2018 Cadet Cup Champion Jordan Reynolds returns to the British Rally Championship this weekend on the Renties Ypres Rally (27-29 June) in a Peugeot 208 R2.

The Englishman has stepped up into the Junior BRC in Britain’s premier rallying series in 2019 but has struggled with his season to date. Two retirements on the opening two rounds in Wales and Ireland and sitting on the side lines for the Pirelli International has meant Reynolds and co-driver Peredur Wyn Davies are fired up and ready to get back to successful ways on the Tarmac of Ypres.

“I have been itching to get back behind the wheel for so long. West Cork was a long time ago now,” said Jordan. “Our season is over from a championship point of view, but for us there is so much to still to achieve this year.  Firstly, despite wining the Cadet Cup last year, I actually didn’t finish in Ypres, so that for me is the most important thing for this weekend. To cross that finish ramp.”

With a mid-season switch from a Ford Fiesta R2T to a Peugeot 208 R2, we asked the Reading-based driver why move to the naturally aspirated French machine?

“After two non-finishes we had to try something different and the Peugeot 208 R2 was available in Northern Ireland and as shown this year it is the car to have as Josh [McErlean] is running away with things. I would love to get to that level but I have only done one test, so for me, I want to build-up the pace and move forward with each stage time.”

Ever the optimist, Reynolds has more ambitions and has several targets in his sight in his new machine.

“For me to finish would be great, first and foremost but I want to get back out there and enjoy my driving. Also, there are some great prizes available from Peugeot UK and Total, so if I bide my time in Ypres – which we all know can create plenty of drama, I could get into the Peugeot top three and pick-up one of those big cheques!”

Jordan will join the other BRC competitors in Belgium for the Renties Ypres Rally this weekend. 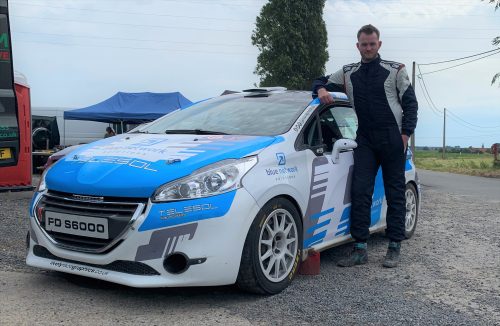