Reynolds ramps up Cadet campaign in the BRC

Jordan Reynolds is the latest driver to swell the Prestone MSA British Rally Championship ranks and the Englishman is all set to fight for supremacy and mix it at the sharp end in the Cadet Cup.

“Seeing the new class last year really excited me as it ran really well and had some great close competition. It was the perfect opportunity for me to use the Fiesta I have and take part in the best national championship in the world.”

The BRC provides the perfect platform for aspiring young and upcoming drivers and provides a real test for not only the machines, but the person behind the wheel. Reynolds is going into the new season with an open mind and hungry to learn more.

“All the events are so appealing and what a way to end the year, on Dayinsure Wales Rally GB. It’s going to be a massive step-up for me as I am only used to 45 mile, single day events so it’s going to be a real experience to soak up.

I want to be as competitive as possible. I want to enjoy it but like everyone else I want to be in it to win it and would love to win an event or two this year.”

The weapon of choice for the Reading-based driver is the proven Ford Fiesta R2. Despite a few patches of unreliability, the young-gun has proven pace to fight for podiums this season.

“I bought the car at the start of 2017 and we had a really good season until the Wyedean where we rolled the car. We rebuilt it over the winter and did the first event on the Cambrian but the water hose popped off and luckily we had no massive damage. We have had a few tests and we are ready to get going.

“I expect to learn a lot this season and experience some of the best stages in the world. My biggest challenge this year may be Ypres and committing yourself to the cuts. I have done most of my events in the forests but I originally came from road rallies. I have a good deal of knowledge on all surfaces, which I think will really help over the course of the season.” 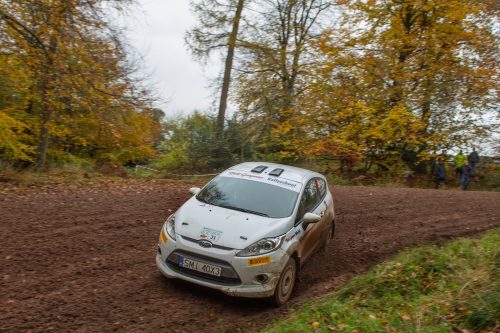