Reigning British Rally Championship (BRC) Cadet Cup victor Jordan Reynolds and Hampshire based preparation firm EDSL Sport will join forces in 2019, after signing a deal to mount an assault on the Junior series in one of the firm’s 1.0litre EcoBoost Ford Fiesta R2T.

In the process, Reynolds and EDSL Sport are set to become the first team to commit to the new-look British Rally Championship which features six all-action rounds in 2019 and the newly formed partnership has its eyes firmly on success, both building on their experiences from a buoyant season in 2018.

Reynolds, from Brimpton in Berkshire, scooped the entry tier Cadet honours at the final round of the series this year in his older specification Ford Fiesta R2 but will now progress into the hotly-contested Junior category after signing a deal with the firm after a recent test in Wales.

EDSL Sport first broke cover at Britain’s round of the FIA World Rally Championship, Wales Rally GB in October, running Team Manager Alex Waterman and Reynolds in the gruelling four-day event. In November, they hosted nine prospective customers at an open day at Walters Arena, each of which drove one of the firm’s three Ford Fiesta R2T’s.

After driving the Junior World Rally Championship specification Fiesta during the session, Reynolds’ desire to progress into the Junior BRC was heightened and almost immediately secured a deal to drive one of the EDSL Sport machines next season.

“EDSL is formed of people I’ve known over the past couple of years and for them to come together and set up an impressive team like this in a short space of time deserves credit,” says Reynolds.

“It was the natural option for me to join forces with them for 2019 and you can tell how passionate they are too which means a lot. This was evident when they helped me win the Cadet Cup on Wales Rally GB so I`m sure I`ll feel right at home.”

For Reynolds, joining EDSL Sport was a natural progression in his career.

“I can’t tell you how much I am looking forward to next year,” he continues.

“I’m very excited to be competing in the Junior BRC, you only have to look at how close the competition was this year, so I hope that continues into 2019. The car is fantastic but there is still a long way to go for me though, so I’m working hard now over the coming months to ensure I can perform at my very best from the first round in February”.

Reynolds also feels that the Fiesta R2T was the logical choice when deciding to mount a full campaign on the Junior BRC.

“The R2T is basically an upgraded version of a car I know very well and after testing the car, I immediately felt comfortable in the car. It really didn’t take long to get a good feeling with it too. That said, next year will be about building the experience gained from the Cadet Cup this season and get more miles under my belt. If I can get on the podium at an event or two, I’d be very happy with that.”

Waterman, the mastermind behind the newly established firm who will be running Reynolds in 2019 is equally as enthusiastic about the forthcoming season.

“It`s great to have a reigning champion become one of our first committed BRC competitors next year and having Jordan with us will certainly be a great asset for the team,” he says.

“We have been working hard over the past few months to pull everything together and have really hit the ground running. Next season is looking very exciting for many reasons and whilst we still have some opportunities available to join us in 2019, we are hoping to have all three of our RT2’s out on the British Championship during the year”.

“Having seen the pace that Jordan demonstrated this year and then the way he immediately looked at home in the R2T on the test day at Walters, it is not a surprise to see him working with EDSL Sport” he says.

“I think that this package could spring some real surprises in 2019.”

The first round of the British Rally Championship kicks off in Llandudno in North Wales with the Cambrian Rally on 16 February.

Registrations are set to open on January 1 2019. 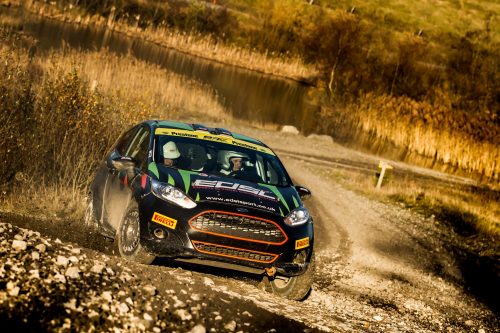