After a gut-wrenching retirement on the last round of the series in Belgium, the Blairgowrie driver will now need to take victory in the hotly contested category if he is to keep his title hopes alive in the series. The John Mulholland Motors Ulster Rally will mark Retson’s third-ever BRC event and his first visit to the closed public road event in Northern Ireland.

The 18-year-old Ford Fiesta R2 driver has followed the ladder of progression through the sport to a tee and after success at Junior level, Retson would soon be looking to take the next step in his career. The Cadet Cup is designed as a feeder series to the Junior BRC Championship and despite his lack of experience on all events in the calendar, Retson has shown an impressive turn of pace in his inaugural season in the category.

However, his undoubted pace is not replicated on the scoreboard and Retson is yet to finish a round so far this season.  Mechanical gremlins have kept the Retson name from the winner’s trophy on both rounds, having retired from strong positions on the Pirelli and Ypres rallies.

Retson is looking to the Antrim based rally as the turning point in his season and is citing the two-day event as the one in which he can grab the opportunity to bag some valuable championship points and his maiden win.

“We literally have had zero luck this season and it’s been so frustrating to retire from really strong positions on every round,” says Retson.

“But you can’t change the past and there is no point in dwelling on the results now so I really need to focus on the Ulster Rally and showing what I am capable of. Nothing less than a win will do for me now”.

Co-driven by the experienced Tom Hynd, Retson still has a mathematical chance of taking the title at the end of the year thanks to the final round of the season, Wales Rally GB, offering a double points scoring opportunity. But it is essential that he comes away from Northern Ireland with maximum points on the board.

“I’m really in the right frame of mind right now,” he says. “We had some really good seat time under our belts in Belgium and the pace was there, even though those stages take years to learn. I’ve had some good seat time recently and the short shakedown this week we had felt good. I feel ready for it. It’s my chance to show what I’m capable of and whilst I don’t want to put myself under too much pressure, I know what I need to do.”

The Ulster Rally is the third round of the British Rally Championship and is spread across two days and 100 miles of competitive action. The opening leg offers several stages under the cover of darkness and 11 in total from the Antrim rally base. 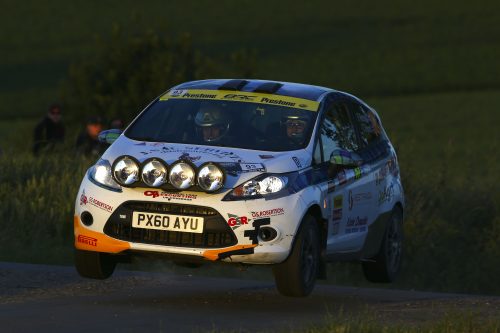