Retson ready to get stuck in

Scottish rising star Finlay Retson is raring to go as the countdown to the first round intensifies.

The Ford Fiesta R2T driver will line-up for the opening round on the Cambrian Rally on the 8 February and is working furiously to secure the budget for the remainder of the season. The 19-year-old had a baptism of fire in his first season in his turbo-charged machine with the highlights a break-through podium on the Pirelli Rally and taking the fight for the 60,000 Euro prize fund to the last couple of stages of the season.

“2019 was not where we liked to be. It was a new car and took abit of time to get used to. We showed we can fight towards the front and our Pirelli podium showed that. Then I made some stupid mistakes which cost us some good points and finishes which could have meant we were higher up in the standings and definitely right up there for the Fiesta prize.”

Looking ahead to the 2020 season, Retson remains cautious despite a year in the new M-Sport Ford Fiesta.

“We have to reset for 2020. A new year ahead and a new competition, but I want to be getting regular podiums. There are some exciting drivers coming into the series and it’s going to be a strong series again, but we have to focus on what we can do. I want to ease into the first round and not do anything stupid. It will be quite some time since I last drove the car and I will have a new co-driver. If we settle with a good pace, I can then push once everything is perfect. I don’t want to have any big moments this year.”

The BRC certainly has plenty of variety on the event front and the Scotsman has his eyes set on a few rounds, providing his team can put together a package for the whole season.”

As well as a new season, there will be a new co-driver in the form of Rhys Stoneman.

“Rhys is a young, hungry co-driver with similar goals to me and I think it will be good to work with him as we progress together.”

The opening round of the series will be the Visit Conwy Cambrian Rally on the 8 February with entries closing on the 25 January. 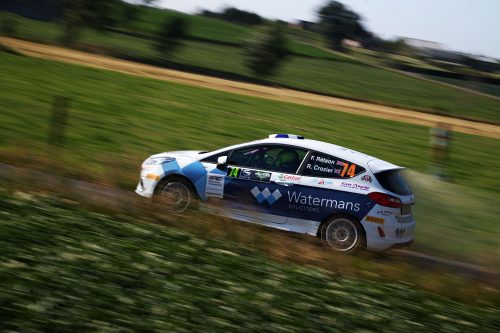