Finlay Retson will return to the Motorsport UK Junior British Rally Championship in 2021, with the lure of a World Championship prize-drive tempting the 20-year-old Scottish ace back to the series.

Having secured the best result of his career at last year’s Cambrian Rally, taking second overall in the JBRC after an intense battle in the North Wales forests, Retson and co-driver Rhys Stoneman will aim to pick up where they left off in 2020, mounting a bid to secure the coveted title and Hyundai Motorsport Customer Racing i20 N Rally2 prize drive on a round of the World Rally Championship on 2022.

The 20-year-old ace from Blairgowrie has campaigned a Ford Fiesta in the British Rally Championship since his inaugural season in the series, contesting the Cadet series before moving into the Junior BRC in 2019. His progress meant the acquisition of an M-Sport Ford Fiesta Rally4 and arguably one of the most capable cars available of winning the title in 2021.

Retson, who was recently announced as a Motorsport UK – Team UK squad member for a second year will tackle his third season in the British Championship this season and is buoyant about what lies ahead.

“I`m really positive about this year and everything feels right to be able to return to the Junior BRC and give it a real good go,” he says.

“I love the calendar, it has a strong mix of events, each with their own challenges and I have the benefit of having contested most of them before in some way or another. It looks a very cost-effective proposition this year which is important to many of us. The addition of the Grampian [Forest Stages] is superb, it’s one of my favorite ever events”.

The youngster endured a mixed 2019 season in the Junior BRC, but two podium spots against some experienced Juniors saw him take second place in the Fiesta Trophy. Runner up at the opening round of 2020 was a welcome boost to his season chances before COVID-19 halted the campaign in its tracks. A run on the M-Sport Return to Rally Stages last August netted Retson a class win and the signs are encouraging for 2021.

“With the World Championship prize drive on offer, it is a no-brainer going for the title again.  We had looked further afield but it makes a lot of sense to come back and be the best of the Juniors this season. Rhys [Stoneman] and I have an excellent partnership in and out of the car and we are both enjoying competing together so that’s important too. There will undoubtedly be a battle ahead but it will be interesting to see what the pace is like, it feels like it could be very up in the air”.

Retson believes he knows what is required this season.

“I’m looking forward to getting the season underway although Oulton Park will be a step into the unknown for many of us. I’ll be looking to get that round of the way as I think more mistakes are possible at a venue like that. We will knuckle down once we get onto the gravel events. I`ll definitely have my mature head on this season and It’s a big honour to be competing for the prize”. 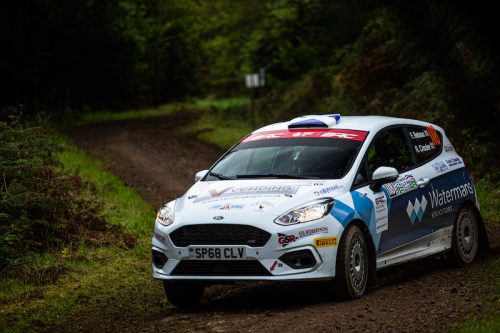