Q&A with Nicky Grist ahead of Round 5 of the MSA British Rally Championship, the Nicky Grist Stages

As a winner of 21 FIA World Rally Championship events (17, including the 1997 RAC Rally, co-driving for Colin McRae), the title sponsor of Round 5 of the MSA British Rally Championship, the Nicky Grist Stages (9-10 July), knows a thing or two about rallying! Still as actively involved in the sport as ever – he owns Nicky Grist Motorsports, the sole UK importer of Stilo helmets, and is an MSA Academy Co-driver Training Coach – this is the sixth year that Nicky has sponsored the award-winning event.

The Nicky Grist Stages hosts a round of the BRC for the first time in its 36-year history – and to celebrate this, Quinton Motor Club has organised a new two-day mixed-surface rally, with 45 stage miles on gravel on Saturday 9 July, followed by a further 60 stage miles on Tarmac over the Epynt military ranges on Sunday 10 July.

With the event fast approaching, we spoke to Nicky about this year’s route and what he believes will be the key to success, as an international field travels to Builth Wells for what promises to be a spectacular rally.

When did you decide on a new mixed-surface event for your first appearance in the BRC and what have been the main challenges in organising it?

“It’s an idea we’ve had for a couple of years now, to make the Nicky Grist Stages a mixture of gravel and Tarmac, and when we had the opportunity to become a round of the MSA British Rally Championship, that cemented the idea. It was the perfect opportunity to have a day dedicated to gravel and another day dedicated to Tarmac. It has been relatively straightforward to organise, because Quinton Motor Club and the Clerk of the Course, Neil Cross, are such a fantastic group of highly experienced rally organisers that organising a mixed-surface event was no issue at all for them. It’s brought some new elements into the planning of the event of course, like flexi-service and overnight parc ferme. The main challenge on the Tarmac sections was to make sure that every stage counts towards the overall results, and that there will be no problems with the average speeds of the top R5 cars, and I’m confident we’ve achieved that in our route planning.”

What different challenges will a mixed-surface event pose to drivers, co-drivers and teams?

“They’ll have to go from one day driving on gravel, straight into the next day driving on asphalt – which are two very different driving techniques – without any testing whatsoever. That’s going to be a challenge, because you can brake so much later on Tarmac and the corner speeds are so much higher, yet crews will have to be on it from the word go on day two, without any practice in between. Mechanics will only have two and a half hours to turn a rally car from gravel to full Tarmac spec in the service area at the Royal Welsh Showground, which normally takes a day or two in a fully-equipped workshop environment. That’s going to be a challenge and something that I know mechanics are going to relish – and it will give spectators something fantastic to watch in service on the Saturday evening.”

The four gravel stages are quite different – what are the characteristics of Crychan, Halfway, Route 60 and Monument?

“We’re very fortunate to have on our event some of the best gravel stages in Wales, and Crychan, Halfway, Route 60 and Monument are full of character. Crychan has a lot more junctions and a few tighter corners for the drivers to negotiate, and it really is a wonderful stage. Halfway is somewhat similar, and there is a lovely section where the road is nicely cambered, which you won’t find on any of the other stages. Route 60 is run entirely on MOD land. It’s very hard gravel run on open moorland, so it’s very fast in places and high-speed commitment is essential to win this stage. There is also a small section of Tarmac near the end of Route 60, to give the drivers an extra challenge. Monument is another MOD stage, full of character and a great stage to drive. I’m sure crews will enjoy the challenge of all the gravel stages this year, which are tackled twice.”

Can you offer any tips to drivers and co-drivers heading to these wonderful forest stages for the first time?

“The high-speed nature of the gravel stages will certainly benefit the people who have done them before. Anyone driving them for the first time will need to make sure their pace notes are right, enabling them to gain confidence in year one for a more concerted effort in year two. Saying that, a driver with great car control and commitment will extract the very best from these stages, owing to their outstanding driveability.”

After the gravel of day one it will be all change for day two, with 60 miles on Tarmac for the BRC crews. What can you say about the asphalt route chosen?

“The Nicky Grist Stages joined the 2016 British Rally Championship calendar quite late in the day, and by then there were certain sections that were unavailable owing to army training operations on the ranges. However, we have a fantastic relationship with the MOD and they have been extremely accommodating, so we are actually using around ninety per cent of the Tarmac roads that could be used. The Tarmac roads on the Epynt military range are exceptionally fast, and not for the faint-hearted! They’re so fast that we’ve had to introduce a necessary evil, chicanes, to slow the average speeds down. We want every stage to count towards the overall results, so we’ve positioned these chicanes mostly in very high-speed straight-line locations, where the rally will not be won or lost. There are still a lot of high commitment sections of road left open for drivers to prove their ability and bravery.”

Day two starts and finishes with the two longest stages of the BRC event. Will these be the key asphalt stages, or are there more surprises in between?

“While all the stages will be important, anyone showing a good turn of speed will maximise their opportunities on the longest stages. The first Tarmac stage on day two is one of the longest of the event, and I think this is where the eventually winners will show their mettle. After the previous day competing on gravel, there will be no time to bed yourself into the Tarmac stages, as it will be flat-out from the word go – so the crew that can adapt quickest to driving fast on Tarmac will be able to gain valuable time.”

This year’s Nicky Grist Stages will have a new VIP hospitality marquee at Llandeilo’r Fan Triangle. What can guests look forward to?

“As a vantage point, I would say that the VIP hospitality marquee at Llandeilo’r Fan Triangle is the best place to watch a motorsport event from in the UK, because it’s right next to the action, you can see the cars for a long time and you can see them on gravel and Tarmac from the same location. There will be a five star marquee set up, great food and drink and excellent company – all on the top of the Epynt military ranges, with stunning views down to the Brecon Beacons. What more can you ask for?”

What would be your Nicky Grist Stages strategy, if you were contesting the event in the co-driver’s seat and out to win?

“Motivation of the driver is absolutely key, as the Nicky Grist Stages will be a rally of commitment, not endurance. Concise and clear pace note reading is vital to boost the driver’s confidence, and for them to perform at the very best of their abilities. There will be no let up. The winner of this year’s rally will have to perform well on every stage, and be willing to fight for every second on both the gravel and Tarmac stages.” 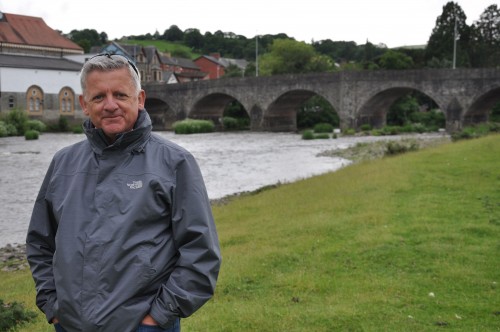