Pryce and co-driver Noel O’Sullivan took their Melvyn Evans Motorsport Volkswagen Polo GTi to a long-awaited BRC win, as teammates Matt Edwards and Darren Garrod faltered on the opening stage of the rally, eventually recovering to second place. Junior BRC frontrunners William Creighton and Liam Regan put their Ford Fiesta Rally4 on the final step of the podium after a blistering drive across the relentless Mull roads.

Steeped in history, the iconic Mull Rally is widely regarded as one of the toughest events on the British rally calendar. The small island off the west coast of Scotland is well known for its brutal stages and unforgiving schedule which sees much of the event’s 148 stage miles taking place under the cover of darkness.

But it would be the opening stage of the 17-test event that would shape the entire outlook of the weekend. Just a few corners into the marathon rally, Edwards would suffer self-confessed “brain fade” and launched his Pirelli-shod Polo off the road, losing seven minutes in the process.

The resultant and rather significant rear-end damage would cause further time loss for the two-time champion, leaving Pryce to open up an unassailable lead.

However, the Welshman would battle handling issues in his Michelin-backed machine throughout the weekend but managed to nurse the car through the merciless stages to secure his first BRC victory in eight years. It would also be O’ Sullivan’s maiden BRC win, further strengthening the pairings hold on the top of the championship standings with two rounds remaining.

“My heart is still somewhere in that last stage and my brain is somewhere else in the rally,” said a weary but delighted Pryce at the finish.

“We came here with a job to do, and we have made the most of the situation with full joker points [bonus scoring opportunity] as well which will make it very interesting for the championship. Work starts now for the Cambrian and Ulster [rallies], let’s hope we can keep this winning streak up.”

“Our last BRC win was in 2013 which makes me feel old, but it’s been a long time coming. We’ve had a few near misses, but to do it here on such a tough rally in such a tough way, it’s very rewarding. The championship battle is back on, let’s hope it continues.”

Edwards was left to lick his wounds from Friday night’s disaster but refused to go quietly. Mounting a Mull Rally masterclass, Edwards never gave up and proved beyond doubt why his previous two titles were no fluke. The Conwy driver won an impressive eight stages, setting a string of new event stage records along the way, to climb from 142nd overall to fifth by the end of the event.

That was enough to clinch the second BRC crew home and ensure his title hopes remain alive heading into his home round, the Cambrian Rally in a few weeks time.

William Creighton and Liam Regan would also suffer opening leg concerns with clutch issues hampering progress for the Junior BRC contenders.  Lying in sixth place in JBRC after the second stage of the event, Creighton would storm back up the leader board by the end of the leg to lead by the overnight halt.

From there, Creighton was never headed, and the Northern Irishman threaded his Rally4 Fiesta through the slippery and unforgiving stages in impressive style. Finishing a breath-taking eighth overall at the highly specialist event, Creighton also secured the Junior BRC victory, adding to his previous two wins already this season and enter into a three-way tussle for the title as the season switches back to gravel in Wales next month.

Scotland’s Finlay Retson was another Junior to return an impressive showing on the island to take the second spot in his Fiesta Rally4. With co-driver Rhys Stoneman alongside, Retson battled with brake issues throughout the weekend to take a mature approach to the lengthy event and secure vital points in his chase for a maiden Junior BRC title.

Junior BRC leaders Eammon Kelly and Conor Mohan would once again add to their podium tally this season, meaning they finish all but one round of 2021 in the top three. With consistency key in the fight for the championship, Kelly kept his Fiesta Rally4 out of trouble to take third place, albeit five minutes adrift of winner Creighton.

Johnnie Mulholland and Calum Maguire secured the Academy Trophy victory after nearest challengers Fraser Anderson and Jack Bowen failed to make the start of the rally with engine issues. Mulholland took his Fiesta R2T to his fourth win of the season and almost certainly sealing the title in the process.

The battle for top honours in the Motorsport UK National Rally Title was a spectacular affair throughout the weekend. Fastest out of the blocks on Friday night was the sensational Jason Black and Karl Egan in their raucous rear-wheel-drive Toyota Starlet. Despite the water-filled roads, Black was in fine form to lead by 44 seconds, before punctures dropped him out of contention.

With the inclement weather favouring the four-wheel-drive contenders, it would be the Ford Fiesta crew of John Morrison and Peter Carstairs that led after the opening leg, before giving way to Alistair and Colin Inglis on the eighth test after a trip into a field. The pairing managed to hold onto the lead until the penultimate test before being overhauled by Garry Pearson and Niall Burns who was on a dazzling charge back up the order.

Pearson would struggle with brake issues throughout the weekend in his Mitsubishi Evo IX and a subsequent off left them with a lot of work to do over the closing stages of the rally. But a relentless drive saw them storm back into the lead to claim their second win of 2021.

Inglis would fail to emerge from the final stage of the rally, leaving Black to take second place despite a puncture fuelled weekend and Morrison rounding out the podium places.

The British Rally Championship returns to more familiar territory for the penultimate round of the season as the Visit Conway Cambrian Rally takes the series back onto the gravel from its Llandudno base in just three weeks. 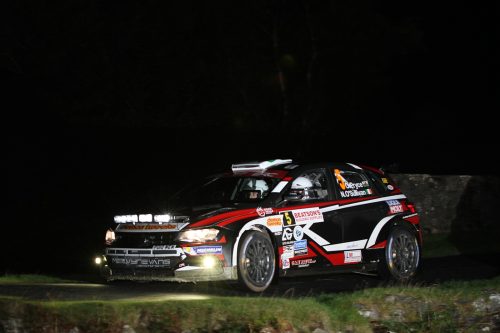