Osian Pryce secured a thrilling victory at the opening round of the 2022 Motorsport UK British Rally Championship on Sunday, overhauling four-time BRC champion Keith Cronin in the final throws of the event to net him the Corbeau Seats Rally Tendring & Clacton [23/24 April] win.

Driving a Michelin shod Volkswagen Polo GTi for a second successive season, Pryce, and co-driver Noel O` Sullivan had played second fiddle to Cronin over the opening two loops of stages before overhauling the Irishman to take the BRC maximum points haul in sensational style. It was the 2017 BRC champ Cronin who took the second spot in the Hankook backed Polo with James Williams/Dai Roberts rounding out the podium in their Hyundai i20 after a confidence-boosting weekend.

Pryce had given himself plenty of work to do after the opening two stages of the event on Saturday night, sitting fourth overall and two seconds shy of Cronin’s pace as crews blasted down the Clacton sea front under the gaze of thousands of eager onlookers as the rally kicked off at the heart of the community.

The rally proper got underway on Sunday morning and with twelve short, sharp stages in store, the 2021 British Rally Championship runner up would need to work hard and fast to close in on the leaders. That he did. By the fifth test Pryce had secured a podium spot and by the time the second loop of stages had arrived, he was battling with Cronin for the lead.

It was the final loop which sealed the deal, as set-up adjustments by the Melvyn Evans Motorsport team at the final service halt transformed the car, leaving Pryce to surpass Cronin for the all-important round one victory. After facing a budget shortfall earlier in the week, the win was even more special for the Machynlleth driver.

“I didn’t think it was possible to be honest [a win] but big thanks to the team, they turned the car around this morning and made it into that sweet thing that we were really looking for”.

“I’m well chuffed really. I almost wasn’t coming on Thursday; we have had a rocky road but I’d really like to dedicate this win to a good friend Richard Lewis who sadly left us this week, so this one is for him.”

Williams and Roberts were a delighted third after battling technical issues with their Hyundai i20. Quickest over the second seafront blast on Saturday night highlights the potential and handed Williams his maiden BRC scratch stage time.

Elliott Payne/Tom Woodburn secured fourth overall on Payne’s closed road-asphalt debut.  Having stuck to gravel for most of his career, Payne professed to enjoy the challenge of a sealed surface event in his Pirelli-shod Ford Fiesta Rally2.

Whilst Pryce and Cronin fought it out for the lead over the bulk of the event’s 14 stages, the podium could have easily had a very different look had it not been for the tricky Essex lanes claiming some noteworthy hard-chargers.

Jason Pritchard/Phil Clarke were the first to fall victim to the changeable Essex closed road lanes after damaging the radiator on the opening loop on Sunday morning. Their Volkswagen Polo GTi’s coolant system crying enough before service.

Ruairi Bell/Max Freeman were just six seconds shy of Cronin heading into the first service halt but failed to emerge from the seventh test after a high-speed spin damaged the radiator in their Skoda Fabia.

Garry Pearson/Dale Furniss made the step up to the BRC1 category after Person became the Motorsport UK National Rally Champion last season, running as high as fourth before ending the event with their Fiesta Rally2 in a ditch.

Equally as enthralling as the battle for the topflight BRC1 honours, the Junior British Rally Championship crews also entered into a scintillating fight for maximum points at the season opener.

It would be Ola Nore Jr/Jack Morton that took the spoils after a riveting fight with 2021 JBRC runners up Eamonn Kelly/Conor Mohan. The two Fiesta Rally4 contenders traded times for most of the event with the gap between them never more than 2.5 seconds all rally long. But it would be the Norwegian that took the lead on the penultimate stage of the event, holding on to secure his maiden Junior BRC win on his British rally debut.

“It’s been a really good day; I really can’t believe I’ve managed to do this,” said Nore Jnr.

“I`m very lucky to have Callum Black run my car; it’s a huge thank you to him and the team for doing such a good job. I couldn’t be happier. We have been fighting with Eamonn & Kyle, but I didn’t want to push too hard. I just want to get the experience and mileage, but I had such a comfortable feeling, I just kept going.”

Kyle White/Sean Topping briefly led the charge in their Peugeot 208 Rally4 before falling away to third as the rally progressed. Some positive times during the event shows the potential of the new machinery. Ioan Llloyd/Sion Williams enjoyed a blistering run in their Peugeot 208 Rally4, taking fourth on their closed road asphalt debut whilst Kyle McBride/Kenny Bustard endured a troubling event to secure a maximum Academy Trophy score.

Craig Jones/Ian Taylor fought till the last for the National Rally Champion top spot in their Fiesta and duly delivered on the final test of the event, overhauling Mick O’Brien/Mark Glennerster’s Ford Focus WRC. Playing their Joker offered up an additional point-scoring opportunity and they grasped it with both hands. William Mains/Richard Bonner took third in their Vauxhall Nova.

The British Rally Championship now returns to the iconic lanes in the Scottish Borders for the Beatson’s Building Supplies Jim Clark Rally in just over a month’s time. 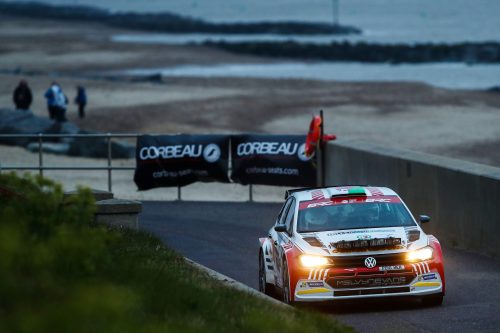