Osian Pryce celebrated his one-hundredth rally start in the best possible fashion on Saturday [9 July], by storming to victory at the Nicky Grist Stages Rally, the third round of the Motorsport UK British Rally Championship.

Pryce and co-driver Noel O’Sullivan were a force to be reckoned with on the legendary gravel stages, taking their Michelin-shod Volkswagen Polo GTi to five fastest stage times on their way to their second victory of the season, adding to their Clacton Rally win. It would be Jim Clark Rally winner Keith Cronin who was Pryce’s nearest challenger in second, whilst BRC returnee Jason Pritchard scooped his first BRC podium of the season in third, making it a Volkswagen rostrum lockout in the process.

A blisteringly hot and action-packed day was lined up for the BRC contenders with Builth Wells providing the base for the eight-test rally which would utilise the same stages which have witnessed World Rally Championship battles being played out over the decades.

A short, sharp day in the woods would mean the margin for error was minimal and it was Pryce and the Melvyn Evans Motorsport squad that stole the march on the chasing pack with the fastest time over the opening Lyn Login test. But the Pirelli-backed Polo of Cronin retaliated on the very next stage, going 1.8 seconds faster to reduce the margin to an eye-watering 0.1 second after the first two tests.

Set for a battle royale over the longer stages that followed, it was Pryce that was in command, going fastest on both the Halfway and Crychan stages to head into the mid-point service half with a 12.7 second cushion over Cronin.

Try as he might, the four-time British champion couldn’t live with Pryce on home soil and the Welshman would take the ultimate redemption for his Jim Clark Rally zero score by taking arguably a pivotal victory in his BRC title charge, even overcoming a final stage puncture to take an all-important maximum score.

“You couldn’t write this really” he quipped at the end of the final stage.

“I lost a little self-belief after the last rally so it’s nice to get the job done and it’s a nice milestone winning the event on my one hundredth rally start. You have to be on it from the word go on sprint events like this and it’s been yet another great battle and we have been pushing really hard today.”

“I’m really chuffed with that one, [the victory], everyone has done such a great job this weekend, Noel [O’Sullivan] especially and I’ve certainly enjoyed the rally, in some challenging conditions; it’s great to have the win.“

Like Pryce, Cronin would also suffer a puncture in the last test which forced him to back off. Nevertheless, second place ensures he still heads the championship standings, albeit with just a 11–point advantage over a chasing Pryce.

After two very trying asphalt rounds, Jason Pritchard would return to the gravel in a four-wheel-drive car for the first time in over 10 years at the Grist; not that you’d know. An impressive performance from the Builth Wells driver saw him pick up the pace throughout the day and battle with James Williams in the Hyundai i20 for the final podium spot. Sadly Williams and co-driver Dai Roberts were forced out with suspension issues leaving Pritchard to sit comfortably in third. A sensational stage win on the final test sealed his first podium of the season.

Garry Pearson confessed to be “driving his own rally” as the Scot would use the Ford Fiesta Rally2 on the gravel for the first time. The Hankook-shod machine would take some acclimatising to in the hot and rugged conditions, but Pearson and co-driver Dale Furniss persevered to take a lonely fourth spot.

A delighted Andy Davies recovered from his monstrous Clacton crash to score his first BRC points of the season with fifth spot. In what was effectively a brand new Fiesta, Davies and co-driver Michael Gilbey made the most of their BRC debut on gravel, racking up the miles and confidence in a positive day for the pairing.

Ruairi Bell and Max Freeman were sitting second to Pryce after the opener despite battling a gearbox issue in their Skoda Fabia. Sadly, that issue would ultimately put them out of the rally on the third stage.

All eyes were on the Junior BRC fight in Wales and the battle for top honours certainly did not disappoint, with three different progressive youngsters taking the lead of the category over the course of the day.

Fastest out of the blocks was Junior BRC newcomer and Australian driver, Max McRae. Co-driven by Mac Kierans, McRae is the son of 1995 BRC champion Alister and is clearly a chip off the old block, leading the charge after the opening stage in his Ford Fiesta Rally4. But it wasn’t long before Kyle White and Sean Topping took the reins in their Peugeot 208 Rally4.

However in a dramatic final two stages, White would suffer two punctures in two stages, haemorrhaging time in the process. Step forward Eamonn Kelly and Conor Mohan. Admitting to being “caught sleeping” in the morning, Kelly turned around his fortunes to keep out of trouble and get back up to speed in the afternoon’s loop. Fighting back from fourth place on stage one, Kelly overhauled White to secure his second win of the season in the Fiesta Rally4.

White was eager to take away the positives from the weekend whilst McRae was delighted with his performance on his Junior BRC and British gravel debut. Johnnie Mulholland and Eoin Treacy scooped another solid performance in their Fiesta Rally whilst Ioan Lloyd and Sion Williams were in the fight for the Junior podium early on before being forced out before service. They used Super Rally to gain valuable mileage for the season ahead.

The National Rally Champion battle would see Alan Carmichael and Arthur Kierans take their Hyundai i20 to a back-to-back win after taking the Jim Clark Rally spoils. Despite missing the opening round in Clacton, Carmichael has returned to full strength and got up to speed quickly on the gravel to make it two from two.

Michael O’Brien and Claire Williams were their nearest challenger in the Focus WRC before succumbing to mechanical issues after the sixth test whilst Craig Jones and Ian Taylor debuted their Ford Fiesta 4×4 on gravel in fine style, taking second spot. William Mains and Pete Pennah rounded out the podium with third in their Vauxhall Corsa, on Mains’ first-ever gravel rally.

The British Rally Championship stays on gravel round four, as the series makes the trip to the Grampian Forest Rally near Aberdeen in August. 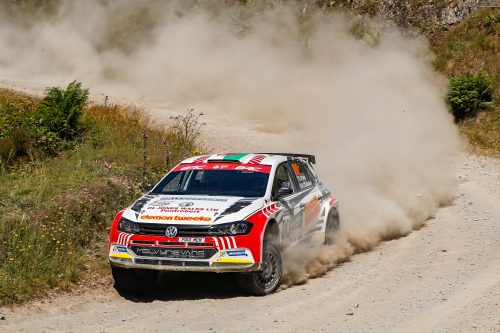