Osian Pryce is the latest star signing to join the Prestone MSA British Rally Championship ahead of the new season. The Welshman will gun for gold aboard a Spencer Sport-prepared Ford Fiesta R5, backed by Hills Ford.

The reigning Drive DMACK Fiesta Trophy Champion will be joined by Dale Furniss once again in the co-drivers seat for a full assault on Britain’s premier rallying series.

The man from Machynlleth is no stranger to the British Rally Champion having taken several round wins and finishing runner-up on two previous occasions before a switch to the Junior World Rally Championship and Drive DMACK Fiesta Trophy.

After dominating the National Rally Cup class on the opening round last year in a Spencer Sport Mitsubishi Mirage, Pryce was itching to return to the BRC top-flight, roll up the sleeves and get stuck into the British forests and lanes once again.

“The idea came about in early September last year. My sponsor Hills Ford wanted to come back into a top-flight championship, so a plan was formed to bring them into BRC. I really wanted to gain further R5 mileage as well and the BRC was a really cost effective option compared to other championships.

After securing the Drive DMACK Fiesta Trophy last year, Osian wanted to keep sharp and match fit ahead of his two prize drives in the World Championship. The Welsh star will be dovetailing his BRC programme with two outings in the WRC with Poland and Finland his scheduled rounds. Having worked with Spencer Sport previously the all-Welsh team are reunited for the 2017 season.

“Spencer Sport were a natural choice as its success last year speaks for itself. They have been really good to me and the whole team and I are keen to achieve great things. Their passion is clear to see and they are fully prepared to go all out for success.

“I am under no illusion it’s going to be a tough year, you only have to look at the entry list for round one. The guys seeded around me arguably have more experience on paper in a R5 car, but I am not going to let that stop us.

“We want to be fighting for wins this year and having finished third once and runner-up twice, there’s definitely some unfinished business between the British Rally Championship and me. So, with a great team and some excellent support behind me, I’ll be going for gold this season.” 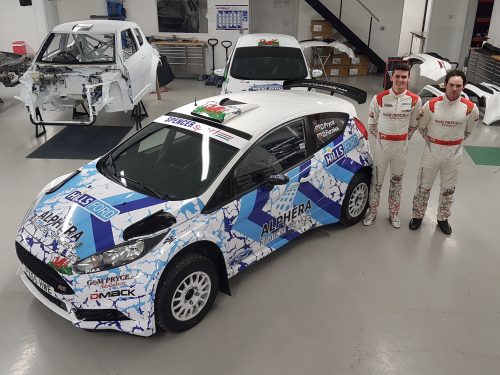