Mellors and co-driver Ian Windress are set to tackle all six rounds of the championship in a move that stamps the BRC as a pivotal role in their plans to reach the FIA World Rally Championship with the newly developed R5 machine.

The Proton brand has enjoyed a long and prosperous relationship with the BRC which stems back to the late 1990’s when Sweden’s Mats Andersson hauled the lively Satria Kit Car to front-wheel-drive class glory. As recently as 2016, MEM fielded a Satria Neo S2000 in the series for Mellors, but in a time when the R5 category was flourishing, their campaign stumbled against more modern machinery.

After three years of work, the Derbyshire based outfit have created the Iriz R5 in-house, with development work from a string of high-profile drivers both in the UK and Ireland, including two-time World Rally Champion Marcus Gronholm.

With four event wins under their belt in 2019, MEM have been seeking progression in their campaign for the Iriz and see the British Rally Championship as a key step in their quest for a WRC2 assault.

“As a team and a driver, we are delighted to be returning to the British Rally Championship with the Proton brand,” said Mellors.

“There is a rich heritage and strong links with the brand and the Championship, even going back to the two-wheel-drive days in the 2000s and it is very much a place that we feel the car belongs in. The competition will be fantastic get amongst the other manufacturers which we would essentially be competing against on the world stage.  That’s exactly what we need for the Iriz R5 and I`m looking forward to seeing how it compares”.

The British Championship offers the opportunity to compete against some of the fastest drivers on UK soil and the Derbyshire based firm believe the Proton has what it takes.

“Everything we have done with the Proton since we began the concept in 2017 has seen leaps and bounds in terms of progression,” says MEM Director Chris Mellors.

“We feel the time is right to launch the Iriz in the British Championship, which we always saw as part of our further progression with the car. This is only the beginning”.

BRC Championship Manager Iain Campbell is delighted to welcome the brand back to the series.

“The British Rally Championship has always enticed the leading motorsport manufacturers to commit to a campaign thanks to it’s diverse events and extremely close competition” he says.

“It’s always been a great fight for ultimate supremacy and having the Mellors Elliot Motorsport Proton squad back in the BRC is fantastic for the series. It’s looking like we will have a great season ahead and adding another brand with such rich rallying heritage to the championship really does raise the bar yet again.”

Ollie Mellors’ best result in the British Championship was fourth overall at the Circuit of Ireland in 2016. The new BRC season begins with the Visit Conwy Cambrian Rally in North Wales on 8 February. 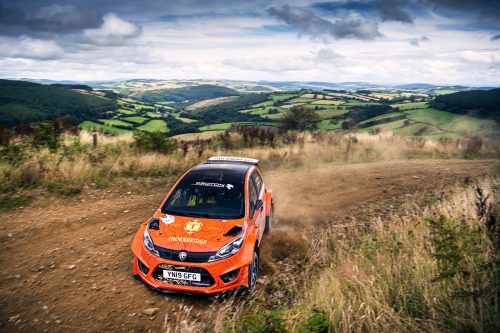