The MSA British Rally Championship is delighted to announce that leading coolant brand Prestone will continue its sponsorship of Britain’s premier rallying series into the 2018 season.

Prestone’s first foray into sponsorship was announced in January and since then the brand has actively supported the British Rally Championship throughout the season. Prestone’s high-profile support has already enhanced the pioneering company’s reputation and visibility, with prominent exposure being generated through the BRC’s far-reaching TV, media, online and social media channels. This is further strengthened by its strong on-event branding and unrivalled spectator engagement, including the popular Prestone Rally Simulator where rally-goers have the opportunity to beat the BRC professionals and pick up some fantastic prizes.

Prestone products are the perfect match for the challenging conditions of the British Rally Championship, as the brand quite literally ‘Excels in Extremes’. Prestone is backing up those claims first-hand, with its products being used by the top teams in the Service Park in 2017. From the damp and rough Scottish forests to the sun-kissed asphalt in Ypres, Prestone’s products have stood up to the variety of conditions and helped crews to spray the podium champagne at the end of each event.

“We are delighted that Prestone has seen the value and success that the partnership with the BRC offers,” said Ben Taylor, Managing Director of championship organiser International Motor Sports. “The Prestone team have really rolled their sleeves up and got stuck in to supporting the championship – engaging with our teams, events, competitors and spectators – and next month they will even take the BRC into Tesco with a new dual-branded pack. To secure the continued backing of such a major brand is a huge endorsement for us and enables us to push forward with the development of the championship to make it even stronger in 2018.”

Head of Marketing for Prestone, Claire Fenton said: “Following a hugely successful 2017 season we are incredibly excited to be able to support the British Rally Championship for a second year.

“Our team has really got on board with the championship, with us all becoming big fans. It’s been fantastic to be able to offer first fill of Prestone to a number of drivers and then follow their progress across the season.

“The continued sponsorship really cements our partnership with the BRC; we can’t wait to get back into the service park in 2018.”

The news comes at an exciting time for the BRC as with just two events to go, the championship is set to reach fever pitch with the title race wide open heading towards the season finale on the Isle of Man. Swedish star Fredrik Ahlin leads the way from Welshman Osian Pryce at the top of the standings, but only 12 points separate third to sixth. Matt Edwards, Keith Cronin, Rhys Yates and Marty McCormack are all in with a chance of clinching the coveted crown and sealing their place in the history books alongside some of the greatest names in rallying including Burns, McRae, Mikkola and Vatanen.

The championship continues this weekend with the classic John Mulholland Motors Ulster Rally on 17/18 August as the crews tackle two days through the fast, narrow roads around the city of Derry/Londonderry. 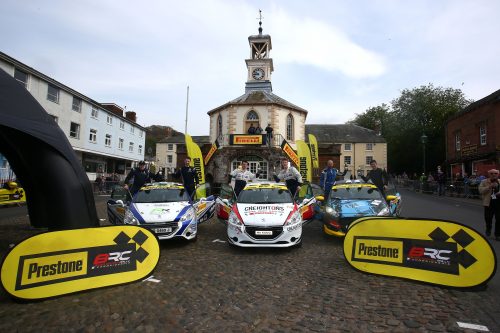