Peugeot Sport race hots up ahead of Scottish encounter

At the start of the season the Prestone MSA British Rally Championship in association with Peugeot Sport and Race and Rally launched the exciting Peugeot 208 R2 Prize initiative for Prestone Motorsport News Junior BRC crews running the French pocket-rocket.

Leading they way after the opening two rounds is Northern Ireland’s William Creighton. William leads the Junior BRC standings and after his narrow victory over Ford Fiesta R2T driver Callum Devine took his first prize voucher after the tough and demanding Pirelli Rally. The man who proclaimed to have limited gravel experience has been on the rostrum on the opening two loose surface contests and will be in the hunt for further 1,000 euro parts vouchers as the season unfolds.

The first Peugeot Sport Race and Rally prize pot went to Dean Raftery. The Irishman who now lives in San Francisco will miss the Scottish round We hope to see 208 R2 driver back in action soon to take the fight to the other Junior BRC frontrunners.

Meirion Evans stepped onto the Junior BRC podium for the first time in Carlisle and is now hunting his first class win as well as his first Peugeot Sport Race and Rally prize voucher. The Welshman is feeling more at home with his new machine and will be threat on all surfaces this season.

Cameron Davies and Marty Gallagher have shown rapid pace in their French machines but driver errors and mechanical woes have prevented them from fighting at the front. Without question these two young chargers will be vying for podiums and prizes before the year is out.

As well as the round by round prizes of 1,000 euro parts vouchers, the highest placed Peugeot 208 R2 driver in the Prestone Motorsport News Junior BRC will receive a further 3,000 euro parts voucher to put towards their future campaign. With five rounds of the seven remaining, it’s all to play for. 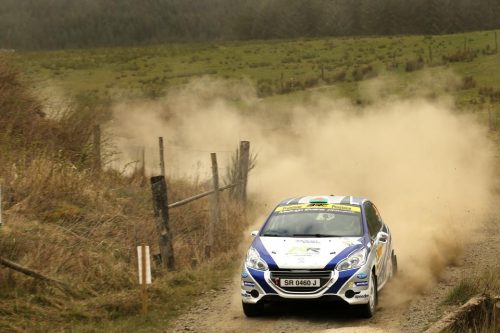