With FIFA World Cup fever in full swing, England are set to face Belgium in their final group game later today. As the only home nation in the tournament, there is a fresh optimism around England and its young squad, and there are hopes the team will progress even further in the tournament than in previous years.

Come the business end of the competition comes the threat of the dreaded ‘Penalties”. The English are not known for their penalty taking abilities in major tournaments, so the Prestone MSA British Rally Championship formed a crack team of drivers from all the home nations to erase previous nightmares and give a renewed hope for spot-kicking.

The British rallying team like the England football team had a confident, no historic scars approach. With their driving abilities unquestionable, their spot-kicking ability had to certainly be questioned as some of the BRC stars kicked the ball into their own net!

After five penalties for the British team and five for the Belgian team it came to a 2-2 draw and sudden death situation followed. Neuville netted for Belgium, thus piling the pressure onto the shoulders of BRC young gun Rhys Yates. The Englishman, put it wide, proving that even a ‘Best of British’ team cannot win on penalties!

“The pressure was too much!” explained Yates. “I stepped up and thought, how hard can it be. I know what footballers have to go through now.

“It didn’t help that we gifted them a few own goals, perhaps we were too confident! Nonetheless it was great fun and I wish England all the very best against Belgium in the World Cup. I will be sticking to driving I think!”

Matt Edwards, Prestone MSA British Rally Championship leader and the BRC section winner on the Ypres Rally was gutted after the competition.
“I’m absolutely devastated,” joked Edwards. “I was happy with my performance. I couldn’t have struck my penalty any sweeter. It just went into the wrong goal!

The next round of the Prestone MSA British Rally Championship is on 17/18 August in Northern Ireland for the John Mulholland Motors Ulster Rally. 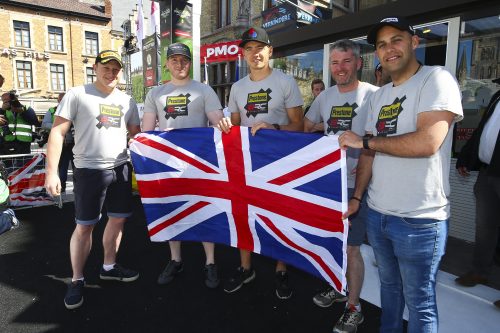