Pearson picks up the pace with BRC title chase

After dominating National rallying in 2021, Scottish driver Garry Pearson will step up to the BRC1 top-flight this season, piloting a Ford Fiesta Rally2 in a bid to add the coveted title to his already impressive CV.

The Duns ace is no stranger to the BRC, having contested the series in the two-wheel-drive era and scooping the Junior title in 2012. After returning to contest the Motorsport UK National Rally Title in 2021, Pearson was a dominant force in each corner of the UK, landing not only the BRC National Title, but also scooping the Scottish, Welsh and BTRDA Rally Series honours to boot.

Pearson’s National Title was an impressive journey too, having skipped the opening round, he entered the fray on the Nicky Grist Stages gravel in his Mitsubishi Evo IX and took a podium before sealing his first win on the Grampian in a Skoda Fabia R5. Victory followed in Mull and the Cambrian to take the championship spoils with one round to spare.

Now, Pearson and new co-driver Dale Furniss will level up to the BRC1 class in a Solid Fuel Hub, Asset Alliance and Hankook backed NPL-run Fiesta aiming for the prestigious British title.

“I guess it was a case of what’s next” explains Pearson.

“As a team, we felt that we needed to move up a level and develop ourselves further. I’ve put a serious amount of work into this campaign and although we’re here to learn we’re up for any fight that comes our way.”

Pearson is aware that he faces stiff opposition in the top rung.

“There is some serious competition this season, as always in the BRC. Looking down the list of entries for Clacton [the opening round] there are several favourites there with many having some proven asphalt pace. It will be great to go up against them all. Our aim must be to learn the level [that everyone is on], we’re under no illusions that the pace is faster, the events require recce and there is a lot more tar than we are used to, so we need to learn.

“I’m excited to be pairing up with Dale Furniss and we’re getting on very well so I can’t wait to link up again in Clacton. Dale has very good experience of BRC1 and European events in general so I think he can help me improve in areas too. Niall [Burns – 2021 co-driver] is staying onboard helping where he can behind the scenes and will attend some events but due to work commitments, he has to stay in Ireland for the majority of the campaign.” 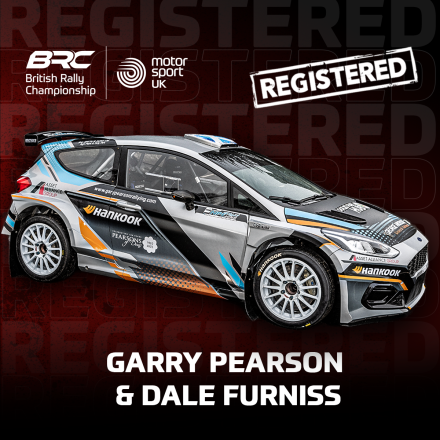