After finishing second on last weekend’s Pirelli International Rally, Osian Pryce reflects on what might have been….

“I had really good memories from Kielder three years ago, we won every stage except one and Dale [Furniss, co-driver] and I had a great event. Ahead of last week’s rally, I thought a win was possible, but the competition in this year’s championship is so tough. It was definitely a good confidence boost to go up the M6 on the back of winning Rally North Wales at the start of last month. OK, it’s a smaller event than it used to be, but it was still our first win in a new car: the Alphera/Hills Ford Fiesta R5.

“Kielder’s quite a different proposition to the stages in mid-Wales. Quite a few sections of the forest had been clear-felled which made it quite difficult to find any reference points. Fortunately Dale and I made a good set of notes and we were happy with the first stage, third quickest and we’d settled in.

“Pushing a bit harder in the next one, we clipped a rock buried in the road and damaged the steering which was really annoying. It didn’t cost us a lot of time, but it definitely took the edge off and meant we couldn’t push as hard as I wanted. A change of steering rack fixed the problem and we finished day one 21.8 seconds behind Fredrik [Ahlin] in second.

“The first Sunday stage was great, we took eight seconds out of the leader and then pulled the gap down to 4.6 seconds after SS6. Things were looking really good.

“The Pirelli was only my third time out in this Fiesta and only my seventh ever rally in a four-wheel drive car, but I was really starting to feel comfortable with it; everything was starting to work and I was feeling good to push on and chase the win in the last two stages.

“As we all know, Kielder contains some of the fastest gravel roads in the country and the organisers put chicanes in the stages to slow the average speeds down. This is understandable, but it was incredibly frustrating when we got to the first chicane in the penultimate stage and I tried to turn the car in on the handbrake… it failed and we slid straight on. I’m not sure what happened or what caused the problem, but there was nothing we could do. Every time we got to one of these chicanes, we had to put the car into reverse to get through. At every one of those things, I knew we were dropping time – it was painful!

“With that problem, second place was the best we could hope for and I was happy enough with that at the finish. It was only when Dale and I were driving home to Wales that we really realised how close we’d come to giving Alphera and Hills Ford their first British Rally Championship win. The frustration was huge.”

But, OK, second still brought good points and keeps us right in the fight for the championship. It’s all eyes on Scotland and round three now… 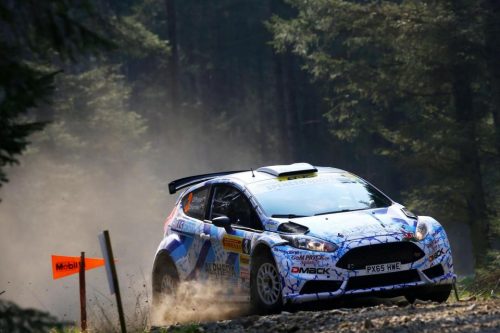