Motorsport preparation company Spencer Sport has confirmed it will field three cars on the Mid Wales Stages, the first round of this year’s MSA British Rally Championship.

The south-west Wales-based firm will enter Osian Pryce and Jamie Jukes in two R5- specification Mitsubishi Mirages in the National Cup, while today (3 February) the outfit announced it will run Tom Cave in a Ford Fiesta R5 Evo for the full BRC season.

Pryce will lead the charge for Spencer Sport, with regular co-driver Dale Furniss sat alongside in the first of the Mirages. Junior WRC podium-finisher Pryce will be looking to mix it up against other R5 cars on the Mid Wales Stages on 5-6 March.

“I am really pleased to be a part of the BRC once again and to be getting behind the wheel of the Mirage,” explained a delighted Pryce. “The car showed promise on the Cambrian Rally last year, and the times were good against other R5 entries despite it being slightly underpowered. The team has worked really hard and I want to repay them and take the fight to the Skodas, Fords, Peugeots and the like on the stages.

“There is a real buzz and excitement about the series again, and I can’t wait to line up on the Mid Wales, which is so close to home. There is no expectation from our side; we want to show the potential of the car and enjoy the experience.”

Spencer Sport owner Jamie Jukes will take to the wheel of the second Mirage and hopes to use the Swedish-built machine to good effect next month.

The team has also just agreed a deal to purchase a Fiesta R5 Evo to contest the BRC1 class alongside its two-car Mitsubishi campaign. The Fiesta will be driven by Cave, the third Welshman in the squad bringing with him a wealth of experience from his previous BRC and WRC outings. He will be co-driven by James Morgan, who similarly hails from Wales and is another regular WRC competitor.

The Spencer Sport team is confident that with a strong line-up in both series, it can challenge for podium positions and outright wins, as well as the MSA British Rally Championship title.

“For the past few months, we have been working hard behind the scenes to bring a professionally-run and high-profile team to the British Rally Championship,” explained Spencer Sport team manager Charlie Jukes.

“To have an all-Welsh line-up is great, and to have the principality represented on the Mid Wales against international opposition is very exciting. I have competed in the BRC previously and it has always attracted the best drivers, and now it has a great TV package the interest in rallying is certainly on the up. To pitch the Mirage against the competition is really exciting, and the BRC is where we want to prove its potential.” 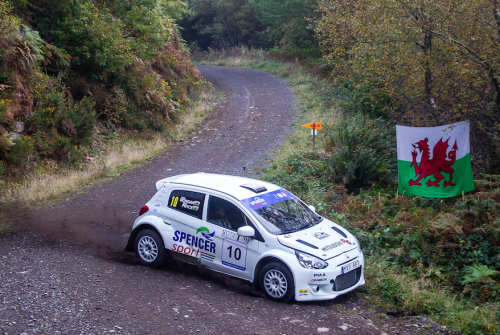