Prestone MSA British Rally Championship leader Osian Pryce leads his home event, the Nicky Grist Stages at the overnight halt by 19.3 seconds from Swedish star Fredrik Ahlin. Pryce in his Spencer Sport Ford Fiesta R5 started at car one and never looked back – dominating the proceedings. Despite suffering from the flu, the Welshman heads to Epynt in the pound seat as he eyes his first four-wheel-drive BRC win.

Ahlin struggled on the opening loop and found it difficult in Pryce’s dust. A strong afternoon run by the CA1 Sport Skoda Fabia R5 driver enabled the Swede to chop the deficit from 22.9 seconds after the morning loop to 19.3 before 12 demanding Tarmac stages tomorrow.

An enthralling battle raged on behind with Matt Edwards, Keith Cronin and Jamie Anderson locking horns over the eight loose stages. Edwards holds the advantage in his Fiesta R5 but will have tarmac ace Cronin breathing down his neck tomorrow.

In the Prestone Motorsport News Junior BRC no fewer than four drivers led proceedings on the Welsh stages. Local star Meirion Evans in his Peugeot 208 R2 took first blood before Norweign Oscar Solberg snatched the lead on the second stage. Two tests later Solberg suffered turbo woes forcing him down the order. Up stepped Marty Gallagher in his 208 R2. The Irishman is having his best run to date in the BRC and led until an on form Cameron Davies leapfrogged Gallagher on the final stage to lead overnight by a mere 1.9 seconds.

In the Cadet Cup, championship leader Josh Cornwell had to retire from day one with gearbox gremlins. Cornwell planned to wrap-up the title this weekend but rival Tom Williams is out to spoil the celebrations. Williams is on a crest of a wave, beating Conrwell on pace and now leads the Cadet formula by a healthy margin over Alex Waterman and Nabila Tejpar going into the final day.

David White is pleased with his days work as he leads BRC4 while BRC newcomer William Hill controls the National Rally Cup.

The Nicky Grist Stages continues tomorrow with 12 stages over the Epynt Military Ranges. 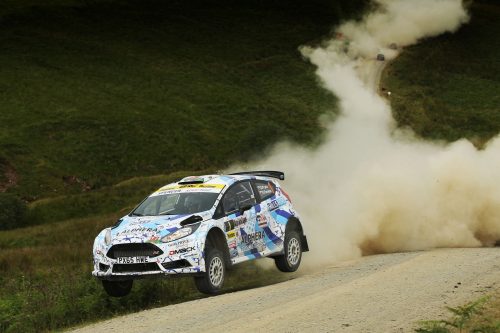