Welshman James Williams will be gunning for success on Rally Isle of Man – the final round of the Prestone MSA British Rally Championship. The young-gun has enjoyed a fruitful first season in Britain’s premier rally series and will end the season in an Opel ADAM R2 from Armstrong Motorsport and will be run by Spencer Sport on event.

The Spencer Sport star has already claimed two podiums this season. The breakthrough rostrum came on the Tarmac of Belgium with the 19-year-old finishing in a fine third in the Prestone Motorsport News Junior BRC category. Along with co-driver Dai Roberts the pair repeated the feat on home soil as they nestled their Ford Fiesta R2T in third once again.

‘’2017 has succeeded my expectations in terms of learning and the progress we’ve made with very limited experience has been really promising,” explained Williams. “However, despite the progress we’ve made, the team and I always arrive at each rally with the will to win and it’s something I would love to achieve in my first year competing at British Championship level.”

Williams and Roberts unfortunately crashed out the Ulster Rally last time out – putting an end to their podium run. Both were ok but the Fiesta was in no shape to continue the Irish event.

“The crash in Ulster was unexpected at the time and there wasn’t much room for error on that particular bit of road, so when the car started moving on the mud – there wasn’t much we could do. Unfortunately the damage caused meant the car was not going to be repaired in time for Rally Isle of Man.”

With the short time frame between the Ulster Rally and Isle of Man, James and his team decided to look at other options to continue their BRC assault.

“It was a tricky decision in terms of what we would decide to do after the crash, but for me it was really important we finished the year, as we are fighting for the podium positions in the championship standings.

“It has been a difficult few weeks but things are coming together nicely now and I’m excited to get behind the wheel of an Opel Adam R2 from Armstrong Motorsport. The car will come from Armstrong in Belfast and will be run on the event by Spencer Sport.”

Having driven the Cup version of the ADAM on the Isle of Man last year, Williams is keen to sample the R2 derivative from Opel as he goes in search of bettering his best BRC result.

“It’s going to be a different challenge for me but I am very excited to sample the ADAM ‘pocket rocket’ on asphalt. Having run the Vauxhall Adam Cup in 2016 the R2 is a natural progression and I look forward to getting into the car and dialling myself in.

I think we have a good chance to get a good result and hopefully we can do it for everyone who has supported me from day one. I would like to thank my team and sponsors – Spencer Sport, HT Installations and West Wales Rally Spares as without them I wouldn’t be lining-up for the final round.’’ 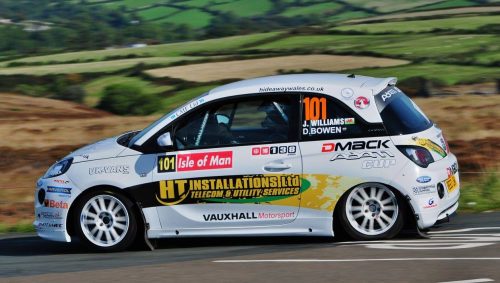