Next year’s Nicky Grist Stages (8-9 July) will host round five of the 2017 MSA British Rally Championship (BRC) – and whilst that will be a two-day mixed surface event, there will also be one-day rounds of other major championships, including the Ravenol BTRDA Rally Series, run on both the Saturday and Sunday next summer.

Organised by Quinton Motor Club, the date of the 2017 Nicky Grist Stages had been published as 15-16 July, but owing to MOD activities on the Epynt military range, the event will take place one week earlier on 8-9 July – the corresponding weekend to 2016, which saw 162 cars start from the Royal Welsh Showground.

Next year’s event will follow a similar format to 2016, with a mixed-surface two-day rally for the BRC crews. Saturday’s forestry gravel stages, run in the spectacular Carmarthenshire and Powys border region, will also host a round of the BTRDA Rally Series and include the MSA Welsh Rally Championship and the FMP Rally Challenge. Sunday’s stages will be held over the challenging asphalts road of Epynt for the BRC crews, plus at least one other National B event.

Builth Wells will play host to the ceremonial start and finish, the main service area will be in the nearby Royal Welsh Showground and there will be a new remote service area on Epynt on the Sunday.

Neil Cross, Nicky Grist Stages Clerk of the Course, said: “Whilst the popular two-day gravel on Saturday and Tarmac on Sunday format of next year’s Nicky Grist Stages will be similar to 2016, the event has acted on the excellent and positive feedback received from competitors and will have a slightly different feel to it. We’ve worked closely with Natural Resources Wales and Rally4Wales to introduce some fresh gravel stages, whilst we’re looking at extending the Tarmac stage mileage on day two and also run a National B event on the Sunday as well.”

Nicky Grist said: “The gravel route of next year’s Nicky Grist Stages is pretty much all confirmed, and we are truly blessed to have some of the very best forestry stages in Wales right on our doorstep. We’ll have a different route layout for the Sunday’s asphalt stages, which will allow the event to breathe. We’ll have a later start and a later finish, and we hope to run as much as seventy stage miles on the Sunday. Cars will still start at thirty-second intervals on the Tarmac – this makes it action-packed for the spectators, and has proven to keep the roaming sheep off the road, which is an important safety consideration.”

Iain Campbell, BRC Championship Manager, said: “The Nicky Grist Stages proves once and for all that rallying is a team sport. The driver and co-driver may be the stars out on the stages, but the mixed-surface challenge from this rally means that the mechanics are the stars on Saturday night when they only have 180 minutes to change the complete suspension parts, brakes and roll bars on the cars. This year there were a lot of anxious faces around the service park as the end of day service began that were exchanged for high-fives and applause all around each competitor’s area as they all completed the set up change in time. A unique challenge on an event that offers stages with the unique terrain of Eypnt – the Nicky Grist Stages is somewhere the BRC is looking forward to going back to in 2017.” 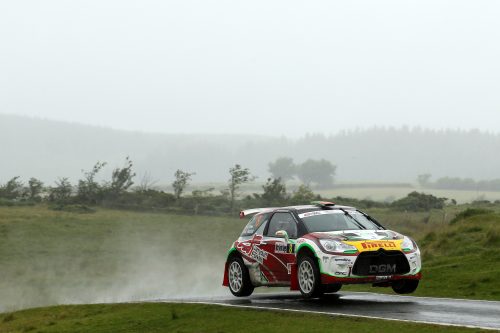