Leicester-based driver Jamie Anderson is set to return to the Prestone MSA British Rally Championship for a full assault on Britain’s premier rallying series with the highly rated CA1 Sport running a brand-new Ford Fiesta R5. He will be joined by MSA Academy co-driver Ross Whittock once again in the hot-seat.

Anderson had a strong first season in the top flight of the BRC, with great pace shown across all seven rounds. Widely acknowledged as a gravel expert, Jamie used the series to develop his all round performance as he set about improving his weaker surface of Tarmac – a challenge he excelled in.

“2016 was a big, big learning curve with a new car, new co-driver and having never done a proper Tarmac event before – I am very satisfied with how the year went,” enthused Anderson.

“We were disappointed with the Mid Wales Stages result and for me the most important thing was to bounce back and we did that on the Circuit of Ireland – my first closed road Tarmac event and what an experience. The roads were really fast and flowing, had great faith in the tyres – everything just clicked and to take fifth in the BRC was a great result for us. Nicky Grist Stages was a turning point for us on the gravel. We were probably about four seconds a mile slower than the front runners at the start of the year but by the Nicky Grist we were setting top three times and right in the mix which is encouraging for the year ahead.”

Turning his attention to the 2017 season, Anderson feels fully prepared ahead of the new challenge and cannot wait to get behind the wheel again.

“I would have liked to have tried other brands of car like the Skoda [Fabia] or Hyundai [i20] but actually I wanted to keep the consistency. I know the Fiesta well, and it’s great to have Ross [Whittock] back, so now everything is built around me and gelling nicely. This year I would like to be showing further up the order – top three or just outside of it on every rally. The main aim is to do better in the championship standings. I have more confidence to challenge near the front and if it clicks again, we will have a very good year.”

Last year Anderson and Whittock ran with north Wales-based MSL Motorsport and over the closed season the pairing have struck a deal with CA1 Sport to run and prepare the brand new Ford Fiesta.

“To join CA1 Sport is very exciting, as the team’s experience is massive and something I want to tap into. They are a professional team and to learn from the likes of David Bogie will really help. To test with others before events will not only help with set-up and advice but I will enjoy the social side of rallying as well, as we wind each other up and spur each other on.”

Asked what his favourite events will be and there was no hesitation.

“I cannot wait for the Isle of Man. It was a phenomenal event in 2016 with a great atmosphere and great stages. I also have unfinished business with the Ulster Rally as we didn’t have the best of runs last year. I now know what to expect and look forward to going back and challenging for a good result.”

Anderson has taken delivery of his new Ford Fiesta R5 and will unveil his new livery in the coming weeks ahead of round one on 17/18 March. 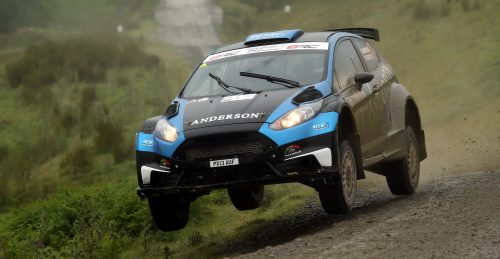