New kids on the BRC block

It was to be a new dawn for many teams but for Ceredigion-based Spencer Sport it was to be their first foray into the MSA British Rally Championship. The Welsh firm became the UK and Ireland distributor for the Mitsubishi Mirage built to R5 specification and were eager to showcase the Japanese machine on local shores.

“We were intrigued like many about the new-look BRC as we had just taken on the Mitsubishi Mirage project,” explained Spencer Sport Team Manager Charlie Jukes. “ The BRC was the perfect platform to showcase the Mirage against the established R5 machines and shortly afterwards we put a great team together for the opening round with Osian [Pryce] and Jamie [Jukes] at the wheel in the National Rally Cup.”

The new kids on the BRC block wanted to further show their credibility and sporting prowess by competing in the BRC1 category of Britain’s premier rallying series. Spencer Sport had great ambitions and were keen to signal their intent right from the off.

“We also wanted to have a go at the main category so we obtained a Ford Fiesta R5 from M-Sport. To sign Tom [Cave] early on was vitally important as we went into the first round with a real strong all Welsh line-up for the season ahead.

“Our aim was to be at the sharp end, fighting for wins and podiums and to secure our first rostrum on round one was a brilliant achievement. It wasn’t all plain sailing before the Mid Wales. Tom and James [Morgan] had a big accident on the Red Kite Stages, our final test before the season. We had just 11 days to rebuild the car and turn it around. The team did an amazing job and for Tom and James to climb back into the Fiesta and come third on our first BRC event was a very special moment for us.”

The team battled on throughout its debut season. Driveshaft woes on the Circuit of Ireland hampered Cave’s progress but a spirited fight-back netted a fine fourth in the BRC category – a feat repeated on the Pirelli Carlisle Rally. Spencer Sport were set to shine in Scotland as the new team recorded their best result to date in the BRC.

“The Scottish was a real high for us as Tom’s pace was incredible. Our gravel form had been getting better and better with every round and to secure second behind Elfyn [Evans] was a brilliant achievement. To then go on and lead the Nicky Grist – our home event – was another great milestone.

“Our Tarmac pace was disappointing to begin with but by the time the Isle of Man came around we were mixing it with Mark Higgins and Elfyn. We had to keep reminding Tom that securing second in the Championship was priority and not to throw it away fighting for the win! It was a mature, strong drive from the boys and to finish second in our first year was the best we could of hoped for – finishing behind Elfyn was no mean feat”

Charlie and the team jumped into the deep end in 2016, fielding Tom Cave and James Morgan in the top flight as well as running a brace of Mirages in the National Rally Cup, a Vauxhall ADAM Cup Car in Ulster and a Suzuki Swift on the Isle of Man.

“It has been a busy year as we ran four different cars throughout 2016. We wanted to give Tom and James the best chance of mixing it with the opposition and we prided ourselves in our reliability as the Fiesta completed every event finishing in the top eight on every rally. Our other priority was to develop the Mirage and it was exciting to see its potential. Osian dominating the class on round one and Robert Blomberg claiming the NRC Championship really showed what the car could do. It is a simple car to work with. In fact after the Ulster Rally, Robert’s car stayed in Ireland and when it arrived on the Isle of Man we just did a spanner check and it ran faultlessly all weekend.”

With the Spencer Sport name now firmly established in the BRC, work hasn’t stopped for the Welsh team.

“We are constantly improving and for 2017 we will be rolling out our ‘plus’ version of the Mirage which we want to be running in the BRC once again. We are continuing to work hard on our 2017 plans as we want to be back in the BRC, fighting for wins and the championship.” 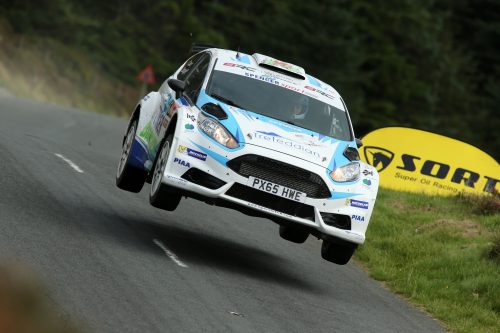