The 2018 Prestone MSA British Rally Championship is one of the most eagerly anticipated in the series’ 60-year history. Britain’s premier rallying series will burst into life for yet another thrilling campaign, getting underway in Carlisle, Cumbria with the Pirelli International Rally, 28 April staging the opening round.

The action-packed BRC features six rounds across the British Isles with a whistle-stop tour taking in challenging stages across England, Isle of Man and Northern Ireland with the final act taking place on Britain’s round of the FIA World Rally Championship – Dayinsure Wales Rally GB. The legendary Ypres Rally in Belgium will once again host the championship’s popular overseas outing.

This weekend the intrepid British championship crews face a one-day shoot out over 80 fast and furious gravel miles in the infamous Kielder Forest complex. The Ceremonial Start will take place at the Pirelli factory on the outskirts of Carlisle before eight timed stages on the fast and flowing gravel roads before a family-friendly finish in the centre of Brampton where fans will be able to get up close to the stars and cars.

Last season went right down to the wire with the title being decided on the final round and on the final stage by just one tenth of a second. Reigning champions Keith Cronin and co-driver Mikie Galvin recently announced they would be making a return to the BRC top flight in a Michelin-supported Hyundai i20 R5 for the coming campaign.

When two tribes go to war!

The Pirelli International Rally will be the home round for not one, but two top flight Cumbrian rally teams fielding four-wheel-drive, turbocharged rallying supercars.

In the blue corner, M-Sport. Matt Edwards and Darren Garrod were the revelations in 2017 as the Welsh pairing notched four incredible podiums in their first full season in the BRC. Edwards’ stand-out performances have led him to a M-Sport supported drive in 2018.

Matt will be joined in the fold by Scottish driver and fellow Pirelli-backed Ford Fiesta R5 driver, Alex Laffey, who has Welshman Patrick Walsh calling the notes. Laffey will be searching for his first BRC podium this year and along with Edwards will lead the attack for the Cockermouth firm and Ford, with the Blue Oval returning to the BRC as a manufacturer once again.

M-Sport built Ford Fiestas will be out in force on the firm’s home event with series returnees Jonny Greer and Kirsty Riddick looking to challenge at the front of the field from the off in the Pirelli-backed Fiesta R5. They will be joined by championship debutant Lawrence Whyte with fellow Scot Stuart Louden calling the pacenotes in another Fiesta.

In the red corner, CA1 Sport from the heart of Carlisle. Twenty-eleven champion David Bogie is hungry for the chance to add his name to the historic trophy once again and has confirmed an all out assault on this years championship with John Rowan joining him in the DMACK-supported Skoda Fabia R5.

Joining him in the CA1 set-up is young-gun Rhys Yates who has made a closed-season switch from a Ford Fiesta R5 to a Skoda Fabia R5. Yates, along with navigator Alex Lee, secured a breakthrough podium on the Nicky Grist Stages last season, and the Englishman is eager to push on for wins in his striking Czech machine.

The final CA1 Sport Skoda will be in the hands of Thomas Preston and Max Freeman who will be keen to get their season off to a flying start on their preferred gravel surface.

Another Skoda Fabia R5 will be in the hands of Marty McCormack and David Moynihan. McCormack’s crowd-pleasing driving heroics have netted him great results on the stages with the Ulsterman bagging three podiums last season including third last year on this event in the Kumho-shod machine. With a win in their native Ireland just a few weeks ago, the duo are aiming to dig deep for another rostrum on the gravel.

The next generation of stars to be unleashed in the forests

The Prestone MSA Motorsport News Junior BRC also gets underway this weekend with a talented group of under 26-year-old drivers ready to fire their two-wheel-drive pocket-rockets into the forests.

Reigning Champion Callum Devine makes a wild card return as he dovetails the English round of the championship with his World Championship commitments and will drive the latest Ford Fiesta R2T built by Cumbrian firm M-Sport.

Devine will relish the opportunity to reenact the 2017 championship showdown with fellow Northern Irishman William Creighton (Peugeot 208 R2) and Oscar Solberg (Ford Fiesta R2T) who will both be vying for title honors in 2018.

Behind will be a host of drivers in five different marques of cars from Citroen, Ford, Peugeot, Skoda and Vauxhall.

In the Junior BRC feeder series, the Cadet Cup for drivers aged 25 and under with limited rallying experience, eight drivers from five countries will challenge themselves and each other on some of the best stages in the world. Look out for Finlay Retson from Inverness and Gunnar Karl Johannesson from Iceland, who both class this as their home event.

John Morrison and Peter Carstairs are the lone runners in the National Rally Cup but that wont stop them entertaining the crowds in their powerful Mitsubishi Lancer Evo9. Downhill Mountain Bike World Champion Gee Atherton has come direct from the World Cup in Croatia to drive his Ford Fiesta R2T with young co-driver Keaton Williams.

The Pirelli International Rally is open to the public and those wanting to see drivers in the heat of battle on Saturday can watch the action on six of the gravel stages. For those who want to soak up the atmosphere at the finish to watch the successful crews spray the champagne can head to the town of Brampton from 16:00 for a street festival style atmosphere. Food, drink and entertainment will be widely available ahead of the first cars from 18:30.

For more information head to www.pirelliinternationalrally.co.uk/spectators-timetable

All five events will be beamed into homes around the world with Channel 4 and BT Sport all showcasing the best of the action with Greenlight Television producing extensive highlights after every weekend.

Quote, Unquote ahead of the Pirelli International Rally

“Last year produced a real edge-of-the-seat season with the title going right down to the wire. 2018 has shaped up nicely and I believe we have another enthralling year ahead of us with some of the best drivers in Europe challenging themselves on the best stages the championship has to offer.

“It’s fantastic to have our defending champions Keith [Cronin] and Mikie [Galvin] return to the BRC as Keith sets about fighting for an impressive record equalling fifth title. They wont have it their own way as there will be a whole host of hungry crews looking for their first podium, first win or first championship title!

“The Junior BRC is going to be as action-packed as ever with 13 drivers vying for supremacy in five different marques of cars and the Cadet Cup is also going to be an interesting category to follow – as the stars of tomorrow do battle over the five events.”

Head of Marketing for Prestone, Claire Fenton said; “This is our second year as headline sponsor and we have some really exciting plans for the season. Starting in Carlisle we are going to have our team of ambassadors, motoring journalist Henry Catchpole and rally enthusiast Luke Barry, on the ground reporting back with live updates and behind the scenes footage at every stage, providing rally fans with exclusive content so they can follow the action even if they’re not attending.

“Rally fans will also be able to get their hands on lots of free Prestone products which will be handed out to spectators at the service park and the stages.

“The Pirelli International Rally is always a special event and we wish all of the drivers taking part the best of luck!” 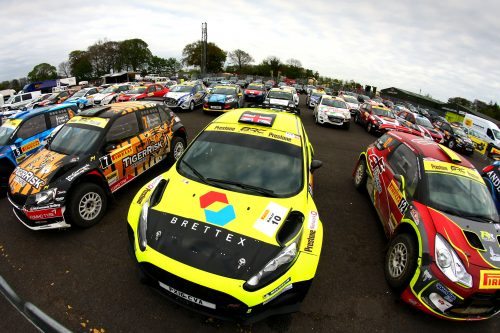