Two-time British Ladies Rally Champion Nabila Tejpar will make the step up to top-flight R5 machinery this season as she is set to contest a selected programme of events behind the wheel of a Proton Iriz R5.

Tejpar, 26 from Maldon in Essex will swap her front-wheel-drive Peugeot 208 for one of the latest cars to be homologated by the FIA (Fédération Internationale de l ‘Automobile), in a campaign which sees her return to home soil to tackle four asphalt events in the British Rally Championship.

The progressive driver has spent the past two seasons driving a Peugeot 208 R2 in the British Championship, the Peugeot Iberica Cup and latterly the FIA European Rally Championship. Tejpar has been seeking experience on a wide variety of surfaces and countries to hone her skills before taking the next step in her career. With 46 events under her belt so far, she has been eyeing the more powerful top-line machinery for some time.

Tejpar has followed the rallying ladder of progression since her very first event behind the wheel of a Proton Satria in 2015. Acquiring a Ford Fiesta R2 the following year, she contested the British Championship for the following two seasons, securing the Ladies title in 2017.

A switch to a Peugeot 208 R2 in 2018 saw her broaden her horizons in Europe, heading to Spain and Portugal to contest the hard-fought single-make series, the Peugeot Iberica Cup. Last year Tejpar tackled the FIA European Rally Championship and was on-course to win the coveted Ladies Trophy before being cruelly denied the chance after ending the final round in Hungary off the road.
But now, Tejpar will embark on the biggest challenge of her career so far by making the leap into an R5, the same machinery that front’s the British and European Championships and is considered the feeder series into the jaw-dropping World Rally Championship machinery.

“I’m excited to announce that I`ll be contesting selected rounds of the British Rally Championship in a Proton Iriz R5 this season, concentrating on the asphalt events which include West Cork, Clacton, Ypres and Ulster,” says Tejpar.

“This really is a dream come true for me and I can’t thank all my backers and supporters for all their help in getting me this far. Of course, this is a massive step up in my career and I don’t expect it to be easy by any means but to have a programme with an R5 means so much to me.

The Proton Iriz R5 is a marked difference to Tejpar’s usual Peugeot 208. The Iriz is more of a “custom made” example, built with the rigours and strains of modern-day rallying in mind. It offers, four-wheel-drive, a sequential gearbox and a 1600cc turbocharged engine producing 350 brake horsepower, around 150 more than her previous car.

Despite the challenge ahead, Tejpar feels this is the right time to launch her four-wheel-drive career.

“I had the opportunity to drive the Proton on a demonstration event last year in Germany and couldn’t believe how quickly I bedded into it” she continues.

“It felt very natural and controllable and, in a way, easier than the Peugeot to drive. Of course, I know the speeds and commitment is going to need to be much higher but I`m hoping to use all my experiences to settle in progressively throughout the year. I`ve given myself realistic targets and that will be my main aim on each round. I won’t be looking for top results at this stage but getting the miles under my belt will be a priority. I can’t tell you how excited I am for the year ahead; it’s all I have ever dreamed of”.

Tejpar will make her Proton Iriz R5 debut at next month’s West Cork Rally in Ireland, round two of the British Rally Championship in Clonakilty. She is backed by Pump Technology, KYOTO, Car Art, Environmental Biotech, Allied Polymer, Advanced Chiropractic and the Warren Estate with new support from Envirologik, Piloti Shoes and Atech Racing 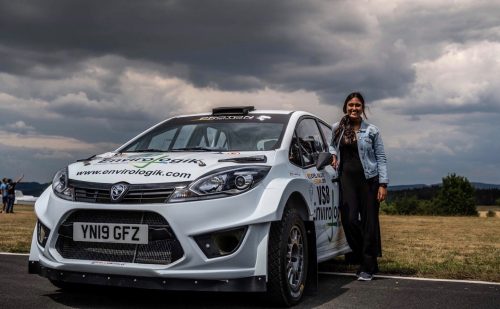