Co. Antrim rally driver Johnnie Mulholland and co-driver Calum Maguire have been named as the first British Rally Champions of 2021, by scooping the Academy Trophy Title at the Beatson’s Building Supplies Mull Rally.

The 23 year old Ford Fiesta R2T pilot narrowly missed out on the Cadet Cup precursor three years ago, but has done enough to be uncatchable in 2021, handing him and Maguire the title with two rounds to spare.

“To say I`m pleased is a bit of an understatement” says Mulholland.

“I was one step away from first in 2018 when I first took part in the BRC” he explains.

“Since the pandemic and other things going on, this year was my first real chance to come back to the BRC and try again, so to take the championship win with two rounds still remaining makes it even sweeter. It really is an honour to be at the top step this year; I am thrilled”

The Academy Trophy was created as a stepping stone to the Junior BRC category, with an impressive prize fund available for the champion of free entries to all rounds of the 2022 Junior British Rally Championship; worth around £5,000.

Mulholland would open his 2021 account in fine style, taking victory at the opening round of the season at the Neil Howard Stages. Rival Fraser Anderson got the march on the Northern Irishman at the Nicky Grist, but Mulholland went on to win every round since and with four wins to his name, can’t be caught.

“I think me and Calum have had a good season” he continues modestly.

“We have been very consistent with our results, and admittedly, maybe not the fastest on every stage, but we managed to finish which is a challenge in itself on some rounds. We have been constantly working on different aspects throughout the season, between pace notes or pre-event preparation, so it’s glad to see our work has paid off at the end.”

It’s been a big effort to make a return to the hotly contested BRC and with many events new to the calendar, Mulholland has needed plenty of support around him.

“I can’t go rallying without a great team. The lads at VSM have done a faultless job all year looking after the car so a huge thanks to them. Calum in the passenger seat has managed to keep me right all year so I have to thank him – although he may not thank me for some of the moments we’ve had! Thanks also must go to sponsors and family for giving me the opportunity to get out and compete, and everyone in between.”

Mulholland is still likely to head to the Cambrian Rally despite wrapping up but the title, but is a move into the Junior BRC on the cards in 2022?

“Those are exactly my plans” he confirms.

“We’ll have to make a few changes in order to be competitive, the car being one, so I’ll have to try and sort that out. But I`m looking forward to another year of the BRC definitely.”

The final note must come from Mulholland.

“On a personal note, I’d like to dedicate this championship win and my success this year to my Dad, without a doubt, he was my biggest fan and supporter; doing his job looking after me for sure.” 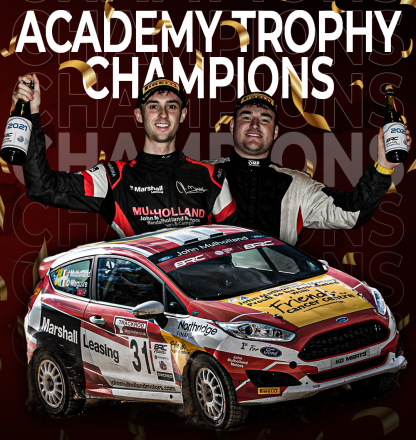