Defending National Rally Cup champion John Morrison and navigator Peter Carstairs will be hoping for more of the same in 2019 in their Mitsubishi Evo 9.

The National Rally Cup is open to any Motorsport UK log-book car and offers competitors to be a part of the BRC and challenge themselves on the best stages on some of the best events in Britain, Ireland and Belgium this year.

A seasoned campaigner, Morrison is looking forward to what the 2019 calendar has in store.

“For Being from northern Scotland we have to travel quite a distance to get events anyway, so I really enjoy the longer rallies as its great to get stuck into a two-day, 70 plus mile event. Makes the trip really worthwhile.”

The larger events and calendar really suited the Scotsman in 2019 as he explains.

“We have come back for more of the same as we thoroughly enjoyed 2018. I am really looking forward to the new addition of Cork as I have never rallied in the Republic of Ireland. Ypres is a great rally, very well organised and fantastic stages. That was the highlight last year but there will be many this year including the Cambrian and closest to home – the Galloway Hills.”

Morrison’s pace improved with every event last season as the Scot got to grips with the big Japanese machine on the demanding BRC stages.

“We have rebuild the car over the winter and I will be zero car on the Snowman Rally which will provide the perfect shakedown. On Rally GB we had electrical problems, which dented our progress and after an extensive overhaul we have found the problem and I cannot wait to get out there and compete once again.”

The NRC provides the perfect opportunity for clubman rally drivers to step-up and try different events, but the recent lack of class support has baffled Morrsion.

“I think many people when they think of the BRC you have to have a special, super fancy car. That’s not the case. So long as it has a rally log-book from Motorsport UK you can come and play. It’s a National A license for most events apart from Ypres where you will need the International licence – put that hopefully isn’t a massive deterrent.

“I get so much enjoyment from the stages as the length of the event allows you to really get your teeth into the stages. The social side and the time away with recce and the event itself is also a great deal of fun.
I use it as a great way to park the work life – enjoy the rallying and use it as a massive escape by tackling some amazing stages, it’s a hell of a lot of fun.”

The first round of the British Rally Championship is the Visit Conwy Cambrian Rally on 16th February. 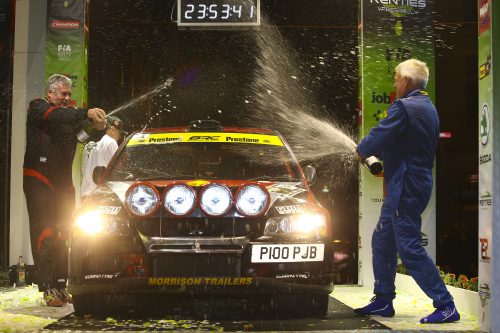