Scottish driver Morrison will return to Britain’s premier rallying series to tackle all seven rounds in the hope of claiming two NRC titles. But it’s not all about success for John as he travels the length and breadth of the British Isles and Belgium to complete his rallying adventure.

“It is great to do something different as it can get quite stagnant doing the same events all the time,” explained Morrison. “Being from northern Scotland we have to travel quite a distance to get events anyway, so I really enjoy the longer rallies as its great to get stuck into a two-day, 70 plus mile event. Makes the trip really worthwhile.”

The National Rally Cup is open to any rally car with an MSA log book and every NRC crew will compete on the same iconic stages as the rest of the BRC teams –one thing that really appealed to the Mitsubishi driver.

“We have come back for more of the same as we thoroughly enjoyed 2017. I am really looking forward to the new addition Wales Rally GB and going back there after a few years away. Ypres was a great rally, very well organised and fantastic stages. That was the highlight last season but all the events are brilliant and the 2018 calendar is one I cannot wait to complete.”

Morrison’s pace improved with every event last season as the Scot got to grips with the big Japanese machine on the demanding BRC stages.

“Last year was a real change for us. We have been used to a Group N car for 10 years and we heavily modified the Evo 9 ready for the BRC. It took time to get used to a bigger turbo, sequential gearbox and a stronger engine but over time it was such a thrill and to drive the car on some great stages, was very enjoyable.

“Infact, one other aspect I have enjoyed is the chance to recce on the tarmac events. It’s another skill in rallying which I wanted to do and you are certainly never too old to learn!”

John and the other BRC drivers will get their 2018 season underway on the Border Counties Rally – round one of the Prestone MSA British Rally Championship. 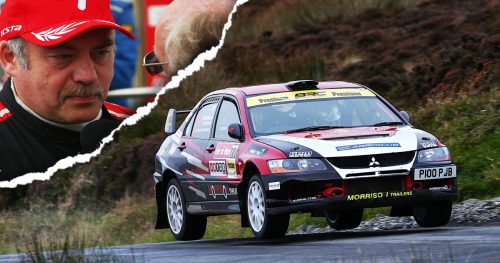