Morgan at the double with second PCSpecialist BRC Esports win

Welshman James Morgan – one of Britain’s top co-drivers made it two wins from two in the PCSpecialist BRC Esports Invitational Championship. While the 2020 British Rally Championship is set to resume in September, the hugely popular Esports series, which is also supported by AMD and Codemasters allows Britain’s premier rallying series’ protagonists to renew rivalries – this time in the virtual world on the iconic DiRT Rally 2.0.

Morgan, who hails from Aberdare won the opening round in Wales earlier this month, and he set about doing the series double as the championship switched from gravel to Tarmac. The second round would be played out on the fast and flowing scorching Spanish asphalt.

Quickest out of the blocks was fellow countryman James Williams in his Ford Fiesta R5 – carving out a three-second lead on the opening test. However, disaster struck on the second stage when the rising star pushed too hard and visited the scenery. Clawing his car back onto the road, Williams would drop back down the order to fifth. Meanwhile, Morgan seized the opportunity and inherited the lead – a position he wouldn’t relinquish as he strode to his second win of the contest – this time his winning margin a mere 2.5 seconds after the four-stage challenge.

Williams, was left wondering what might have been. His pace was clear for everyone to see, as the driver from Newcastle Emlyn topped the time sheets on three of the four tests. From fifth on stage two, Williams fought-back and stole the runner-up spot after a glorious fight-back.

Reigning Junior BRC Champion Josh McErlean put in another strong showing as the Irishman rounded out the podium – his second on the bounce – this time only finishing 3.5 seconds off the rally win.

Defending British Rally Champion Matt Edwards, confessed he struggled with car set-up, but was pleased to finish the event in one piece and with a strong haul of points in fourth, while Scottish co-driver Richard Crozier produced another ultra-smooth and ultra-competitive showing to round out the top five.

For those who missed the action from the second round can watch it back on the British Rally Championship Facebook page and Motorsport UK YouTube channel. Those wanting to upgrade their own gaming set-up can do so by visiting pcspecialist.co.uk and by using the code: EBRC – gamers can receive a discount for the latest PCSpecialist products.

Round Two Winner: James Morgan said:
“What a battle!” exhaled Morgan. “Everyone has upped their game after Wales and it was a top battle between the 11 of us. James Williams to be fair was on it over the two evenings and after the first stage, I knew I was in for a big fight and I didn’t have an answer for James [Williams] in the first stage. It was disappointing to see him go off, but it goes to show, if you try to hard, you will lose too much time in one way or another. Once he went off, it allowed me some breathing room, but not a massive amount as eight seconds covered the top four at the end. It was a great battle and I am pretty pleased to take a win on both surfaces and look forward to the second half of the series.”

Motorsport UK eBRC
Members of the public can take part in the Motorsport UK eBRC – the first ever British Esports Championship to be affiliated with the governing body for British motorsport. Open to members of Motorsport UK, the four-round series follows the Invitational events – using the same stages and same weather conditions. Every driver will use the Ford Fiesta R2T in the game and the winner will be crowned a British Champion and will receive a test in a real-life version of the car – courtesy of front-running BRC team, EDSL Sport.

Registrations are still open with the deadline for the second round is Midnight on Thursday 28 May. All registrations after this date will join the series from round three.

BRC Championship Manager Iain Campbell said: “Congratulations to James Morgan once again. As a co-driver, he knows how to keep his cool in high-pressured situations. When James Williams went off, he didn’t falter and just did what he had to do to win his second event. I feel for James Williams as he was fast this week, but to finish first, first you must finish. There was a phenomenal pace shown by our top guys, just 15 seconds blanketed the top-five and the two rounds so far have produced plenty of drama – replicating the scenes we see on a usual BRC event. We can’t wait for the next round and we can’t wait to see which member of the public wins the Motorsport UK eBRC at the end of this week. If you haven’t done so already, register and take part. It’s great fun! 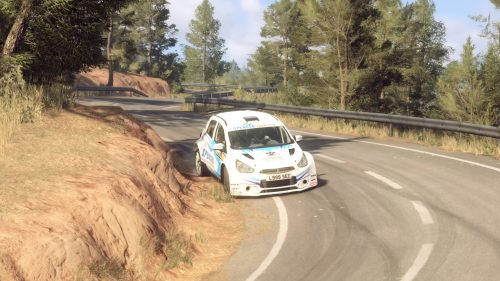