McErlean is no stranger to the Hampshire based squad after impressing onlookers at the Nicky Grist Stages in 2017 behind the wheel of the 1.0litre EcoBoost machine. Setting several top times in the hotly contested Junior BRC category on the event, McErlean sat out the remainder of the year to find the backing to return for a full assault on the series in 2018.

The reunited partnership will contest this weekend’s BTRDA qualifier in a bid for seat time ahead of the opening round of the BRC, the Pirelli International Rally at the end of the month. McErlean will be co-driven as usual by Aaron Johnston.

The Northern Irishman was a stand-out competitor in the early part of 2017, taking his ageing self-run Citroen C2 R2 to some impressive results despite the lack of development compared to the leading crews.

His one-off outing with MH Motorsport in the summer highlighted the potential of the 18 year old and Team Principle Mike Harris was keen to secure the rapid youngster for the season ahead.“We had one eye on Josh for a while last season and we wanted him in the car for this year” said Harris.

“I sat alongside him on in a test and it confirmed exactly what I thought. But for now, the focus is on this weekend and it will give him the chance to settle back into the Fiesta under rally conditions. There won’t be any pressure and we are looking for a solid finish under his belt to kick off the season and get more experience of the R2T”.

McErlean echo’s Harris’ sentiments and is looking on the weekend as an extended test.

“We have had some testing over the winter but you can only do so much over the same bit of road before it has a negative impact” he says.

“By competing this weekend, it means we can ensure everything clicks and we go to the Pirelli with everything fresh, from the car to the pace notes and the team.

I`m still using this as a test though and times won’t be important. We will focus on getting bedded in rather than push on and getting sucked in to any class battles. I`ll have one eye on the times, just for my own benefit but we will be very much doing our own thing.” 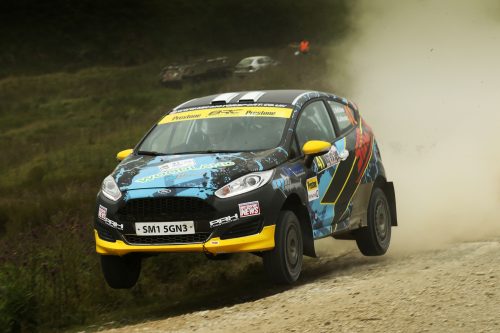