Ollie Mellors and Ian Windress will tackle the Severn Valley Stages this weekend in preparation for a mid-season charge in the MSA British Rally Championship.

The Derbyshire driver has had a mixed start to his first BRC campaign taking just one points score from the opening three contests in Britain’s premier rallying series. All three events have seen Ollie show flashes of brilliance with rapid times on the stages with a fine sixth overall on the Circuit of Ireland being his best result to date.

“The Pirelli was a difficult event for us,” explained Mellors. “We were hoping for a good run as we have quite a bit of experience in the area and the car really suits the terrain and conditions. The stages were incredible and what it disappointing for us, is that our retirement came on a second gear corner! We got stuck in a ditch and with no spectators around, that was the end of our event.”

Mellors believes the best is yet to come in his SORT Oil backed Proton Satria S2000.

“We are doing the Severn Valley Stages this weekend as good competitive test before the Nicky Grist Stages next month and also keep us sharp as we haven’t been in the car since the Pirelli Carlisle.”

The Bakewell-based driver is optimistic ahead of the fourth encounter and believes his preferred rounds are yet to come in the Malaysian machine.

“The Scottish for us is important to get our season back on track. I want to get to the finish and get some more points on the board especially after two DNF’s this year so far. We don’t want to risk anything as a good finish is important, especially as I have not had much luck in Scotland previously.”

Young-gun Mellors is a dab hand on both gravel and asphalt but admits to harbouring a preference for Tarmac, which will be the surface of choice for the final two rounds this year.

“I wish I could play my Joker on the Isle of Man as I have a lot of experience on the Manx lanes. This year is a learning curve and think the next few events will suit me and the car and we hope to bank further points in the run up to the Manx where our experience will come to the fore for the double points scoring round.” 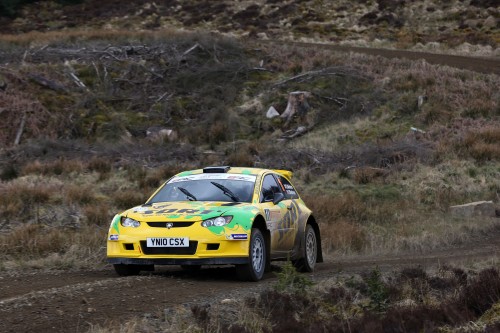