Co-driven by Kaine Treanor, McKenna will swap his usual Fiesta World Rally Car for one of the latest generation R5 examples and will embark on his first-ever BRC1 campaign.  The Omagh driver has been a regular sight in the Irish forests over the past few years, winning the Class 7 battle in 2019.

With just two mainland UK events under his belt, each round of the 2021 BRC calendar will be a new offering for McKenna and with the opening round of the season taking place on the asphalt of Oulton Park, the Northern Irishman is looking forward to the challenges of the season ahead.

“There will be a lot of ‘firsts’ for us on the first round,” says Mckenna.

“It’s the first time Kaine [Treanor – co-driver] and I will have sat together, the first run out for me in R5 machinery and my first asphalt event for a very long time. But I`m delighted that we can finally go rallying again and full credit to the BRC organisers for putting on a fantastic calendar in these tough times”.

With a bumper entry for this year’s Championship, McKenna will be up against some of the fastest R5 pilots in Europe but has his own goals for the opening round.

“The competition is unbelievable so we need to be a little realistic and learn as much as I can about the Polo at the first event. It will take a while to acclimatise after being in a world car for so long but Oulton Park will be the best place to do that I think. The aim is certainly to have some good craic along the way and if we can get anywhere near the times then that’s a real bonus”.

“I grew up on the gravel so the Nicky Grist Stages will be a little more comfortable for us but it’s just great to be back out there rallying again. I`m buzzing to get going”. 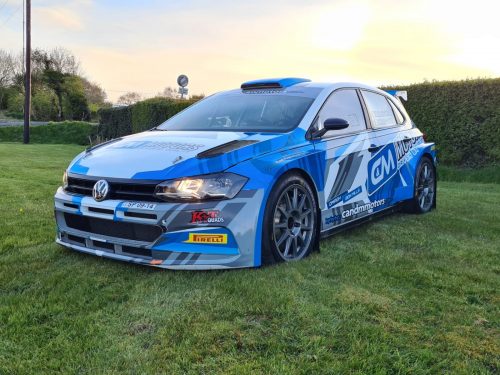