After a one-off outing in the M-Sport machine for the Nicky Grist Stages during last year’s championship, McErlean will re-join the MH Motorsport squad for a full assault on the championship, starting at the NCS Border Counties Rally in March.

Finishing third in the Junior battle thanks to Norwegian Oscar Solberg in 2017, the Hampshire based rally team have signed McErlean for the season in a bid to become Junior champions.

At just 17 years of age McErlean has shown an impressive pace during his debut BRC season in 2017. After campaigning an outdated Citroen C2R2 during much of the year, his outing in the MH Motorsport Fiesta in Wales last July gave a glimpse of what to expect from the Irishman, setting top three stage times in his inaugural outing in the car.

Team Principle Mike Harris is delighted at the new signing and believes Josh will be the perfect addition to the team.

“We had been keeping an eye on Josh for much of last season so when we had the opportunity to put him into one of our R2T’s, we grabbed it with both hands,” said Harris.

“He returned a very mature drive on the Nicky Grist Stages and it was more than enough to convince us that we wanted he back full-time this season.  With our close links to M-Sport and the backing behind us, we are confident that we can give Josh the best possible chance of the Junior title in 2018”.

McErlean is equally pleased with the prospect of what lies ahead this season with the team.

“I am delighted to have secured a drive with MH Motorsport for the upcoming season in the British Rally Championship after all the hard work put by my family and sponsors,” said Josh.

“A top team, in a first class car, competing in such a prestigious championship, it doesn’t get much better than that!”

He feels that it is the right package to compete at the sharp end of the ultra-competitive Junior BRC category.

“With MH (Motorsport) coming up with an excellent package that suited the needs of both myself and my sponsors it didn’t make much sense to look elsewhere. We came away from the Nicky Grist Rally knowing we had the pace to compete at the front, we got to grips with the Fiesta considerably quickly and this was helped by the outstanding handling and stability of the M-Sport built car. The support MH offered before, during and after the event was tremendous, the simple combination of all factors simple cemented the decision for this year.”

However, McErlean’s hopes for overall honours remain grounded and he is well aware that it won’t be an easy season.

“The Junior BRC is shaping up to be another cracking year of competition. With plenty more experience heading into this season, the aim for 2018 is of course to become Junior BRC champion, but that’s easier said than done! We will take it round by round and see how it plans out, staying cool and get points on the board early on in the season will be important. During pre-season testing, I hope to adapt the car more to suit my driving style, look to see what areas we can improve and make sure we are ready to attack the first round in Jedburgh!” 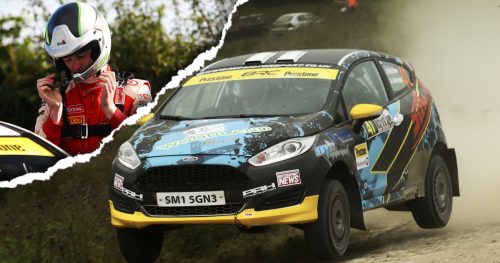