Northern Irishman Josh McErlean in his Peugeot 208 R2 was crowned Junior BRC champion on home soil after securing his third Junior BRC win of the season. McErlean from Kilrea has been the class of the field this season and with Keaton Williams expertly guiding alongside, the local star clinched the coveted Junior BRC title and with it a further £2,500 from Peugeot UK and TOTAL – adding to his West Cork and Pirelli glory. To round out a perfect year, McErlean will have to contest the final round to help secure Williams his well-deserved JBRC co-drivers title.

“It’s hard to believe right now and think it will take a while to sink in, but I have to thank everyone behind me, sponsors, family, friends who have looked after us this year. It wasn’t an easy rally and on every stage there was a battle. We really pushed hard in that last loop and unfortunately James had a problem, but that’s rallying, we were in that position last year. I can’t put it all into words!”

McErlean didn’t have it his own way however. After the demise of fellow 208 R2 crew William Creighton and Liam Regan early on, McErlean assumed a lead at the top of the front-wheel-drive category. Ypres winner James Williams with stand-in co-driver Dai Roberts were pumped-up and wanted to mix it with the Irish stars as they also looked to give the new Ford Fiesta R2T success across the Irish Sea.

Williams was taking it to McErlean in the Irishman’s backyard and after a slow start, Williams reeled in Josh – leapfrogging him on stage five to take the lead. With an outside shot at the title, Williams gave it all he could, but on the final loop of stages the Fiesta was down on power – allowing McErlean to scamper away to victory. Nursing the Ford, Williams took second and left wondering what might have been, but importantly the Welshman walked away with top points in the Fiesta Trophy putting him in a strong position in the fight for the 60,000 Euro prize from M-Sport and Pirelli.

Irishman Jordan Hone with co-driver Aileen Kelly made it three different manufacturers in the top three as they threaded the Opel ADAM R2 into third in the JBRC. The crew were delighted with the final result as they sprayed their first bottle of BRC champagne.

Ruairi Bell enjoyed his first trip to Northern Ireland and was expertly guided by 2018 event winner Darren Garrod. The pair managed to bring their Ford Fiesta R2T into fourth place to keep them in the Fiesta Trophy hunt going into the final round.

Elsewhere in the Fiesta Trophy runners, it was to be another frustrating weekend for Marty Gallagher and Dean O’Sullivan. The pair where running well in the top three and were set to repeat their Cambrian podium but injector failure put them into an early bath.

Finlay Retson and Richard Crozier and team had a busy few weeks to repair the car after a sizeable crash in Ypres. With paint still touch dry the Scottish duo were right on the pace, punching in top four times. With Gallagher’s demise, Retson was in line for a podium but he too faulted on stage five when the Fiesta went off the road, dropping him out of contention in the Fiesta Trophy.

William Creighton and Liam Regan were full of optimism ahead of their home event and the 2017 JBRC Ulster winners wanted more of the same in 2019. While lying second the Irish pair overshot a junction on stage two and damaged the front end of the car after an impact with a bank. Getting the car back to service the team repaired the car and Creighton and Regan went back out under Rally2 and secured sixth overall – keeping them in with a shout of second in the standings heading to the Hills of Galloway.

BRC new recruit Rupert Flynn and co-driver Peredur Davies clinched the first Cadet Cup win of the season and with it fifth place in the JBRC standings while John Morrison and Peter Carstairs guided their Kumho-supported Mitsubishi Evo 9 to the National Rally Cup win and now have an unassailable point lead in the NRC standings. 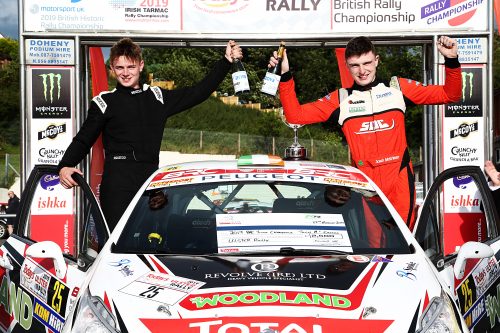