Josh McErlean and Keaton Williams took their first Junior BRC win last time out in West Cork and came to the Pirelli International Rally full of confidence. The Pirelli-backed Peugeot 208 R2 crew punched in the fastest time on the first stage and never looked back before a dominant display saw the pairing stretch a 53 second rally win and, in the process, scooped £2,500 from Peugeot UK and Total.

2017 JBRC rally winners William Creighton and Liam Regan returned to podium in their Peugeot 208 R2. They slid into a bridge on stage three and despite losing time, the Northern Irish crew pushed on to finish second overall – aiding their championship aspirations.

Finlay Retson and Richard Crozier having been gathering pace round-after-round and were in the podium hunt right from the off. Retson entered into a final stage dual with Jordan Hone and Aileen Kelly, with both crews keen to give the brand-new Ford Fiesta R2T its maiden podium. With an inspired drive the Scottish crew got the better of their Irish rivals by just 0.7 seconds as they completed the third step on the podium – their first in the BRC together and in the sixth different crew to spray champagne this season.

Hone had switched from a Opel ADAM to a EDSL Sport ran Fiesta. Getting to grips with the turbo-charged machine quickly, Jordan set several top two times over the event and although disappointed with fourth, the Irishman has a great platform to build on for the next round.

Marty Gallagher and Dean O’Sullivan had a disastrous West Cork Rally and with their freshly built Peugeot 208 R2 the pair got a vital top five finish to but their season back on track.

The biggest heartbreak on the event was felt for the Sloan brothers. Scott and David had a sizeable off on the West Cork Rally and worked tirelessly to get the car to the Pirelli start line. The Peugeot 208 R2 were all set to take their first points and a strong sixth place but the pair were robbed when the driveshaft let go on the final stage. We hope to see the plucky pair on the next round in Ypres.

Ruairi Bell and Darren Garrod came into the event with high hopes of a strong finish to hold their top spot in the Fiesta trophy standings. Unfortunately a rare off for the Fiesta crew saw them retire on the first stage.

James Wilson and Arthur Kierans led the standings coming into the English round, but disaster struck the Irish crew when the engine cried enough on stage two, forcing them into an early retirement. 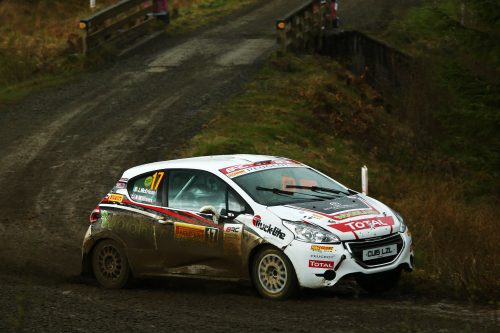