Josh McErlean has been nominated for this year’s Motorsport Ireland Billy Coleman Young Rally Driver Award for his performances in the period January to April.

Josh, who will turn 20 next week, has been competing for the past 4 years and is a former Northern Irish and British J1000 Rally Champion. Following those successes, which he ranks among his best achievements to date, he stepped up to the R2 class, starting in a Citroen C2 before moving to a Ford Fiesta and now, a Peugeot 208.

With an eight point lead in the Junior British Rally Championship, McErlean plans on seeing out the remaining 2 rounds of the series and realising his ambition of becoming champion, emulating the previous successes of former Billy Coleman Award winners, Robert Duggan and Callum Devine, who are both previous winners of the Championship.

Josh is a Mechanical Engineering student in Jordanstown University, and has just completed his first year of studies. His principal sponsors are Woodland NI, SDC Trailers, Truck-Lite and Revolve Ireland. Josh is particularly grateful for the support of his family and friends, especially all the Macsport team who prepare the car and his co-drivers who have partnered him in 2019, Gerard Conway, Liam Moynihan and Keaton Williams.

This year’s Billy Coleman Award will see 3 qualifiers selected from the following monthly groupings; January-April, May-July and August-October. These nominees will be joined by the highest placed eligible drivers from both the Junior sections in the Triton Showers National series and the Valvoline National Forestry Championship in both class 16 and 16A, the highest placed eligible driver in the dual surface Motorsport Ireland J1600 Junior Rally Series and a wildcard selection, meaning that up to 9 drivers may be nominated for the award in 2019.

The winner of the Motorsport Ireland Billy Coleman Young Rally Driver of the Year Award receives €50,000 worth of support to contest rallies nationally & internationally in 2020 along with the support of Billy Coleman co-ordinator, Sean McHugh. Additional support from the Motorsport Ireland Rally Academy as part of a training and development plan to further the winners’ career will also be available and the winner may apply for funding for a second year of support upon satisfactory performances in their award winning year. Both of the runners up will receive support to compete in stage rallies at home and abroad up to an amount of €15,000 each. 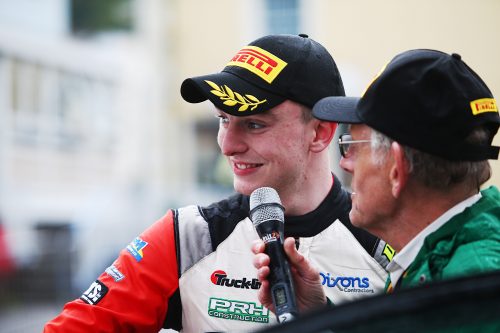