Irishman Josh McErlean and co-driver Keaton Williams claimed their first Junior BRC win in their Peugeot 208 R2 and in the process scooped a £2,500 cheque from Peugeot UK and Total.

McErlean has come close to snatching the top-spot on several occasions but the bridesmaid became the bride as he became the second new winner this season to spray the champagne on the top-step. This result has elevated him to joint leader in the points standings.
“I am over the moon, the monkyt is off the back. It took a while now, especially after the Ulster last year when we were really down but we picked ourselves up and to have finally won we are really happy!”

Marty Gallagher and Dean O’Sullivan were the initial leaders until the pair crashed out of the event – luckily both were unscathed.
Jordan Hone and Aileen Kelly (Opel ADAM R2) inherited the lead and were the overnight pacesetters – creating a tantalising battle royale with McErlean going into the final day. McErlean was a man on a mission as he grabbed the lead and never looked back – powering his way to maximum points in Clonakilty. Stage 13 was to be unlucky for Hone, as his fine run was to sadly come to an end as Opel ADAM R2 slid off the road and out of the event.

Vauxhall ADAM R2 driver James Williams and co-driver Tom Woodburn put the round one retirement behind them to finish a fine second.
“It’s been a really tough rally. First day was hit and miss as we didn’t know what to do with set-up as we have never been here before. We did our own thing this weekend, it didn’t start great with a spin but we kept plugging away and picked off the positions one by one to finish second. Really happy with that.”

William Creighton and Liam Regan continue to be a regular feature on the JBRC podium as they notched up third.
“It was a tricky rally especially towards the end. We had a bit of slow start but just delighted to get to the end and with third place points is a bonus.”

James Wilson and Arthur Kierans came to West Cork as championship leaders and leave the second round as joint points leaders with McErlean after a spirited drive to fourth despite misfire and accident woes. After setting some impressive stage times in the brand-new Ford Fiesta R2T, Ruairi Bell and Darren Garrod rounded out the top five and snatched maximum points for the Ford Fiesta Trophy.

Finlay Retson was getting used to new co-driver Richard Crozier and second in the Fiesta standings and sixth overall was a solid result in their first season in the JBRC. Bart Lang and Sinclair Young in a older specification Fiesta R2T enjoyed the Irish lanes and picked up seventh while Nabila Tejpar and Max Freeman were pleased to put their first round exit behind them to pick up their first JBRC points in their Peugeot 208 R2.

Fellow 208 crew Scott and David Sloan didn’t make it to the end of stage one as a sizeable shunt prematurely ended their weekend, while Jordan Reynolds and Peredur Davies’ weekend was cut short after suffering electrical problems on stage 11 in their brand new Ford Fiesta R2T. 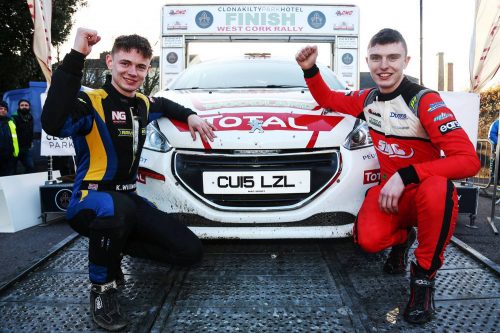