McErlean bids for title with Hyundai i20 R5 drive

Billy Coleman Award winner Josh McErlean will take the next step of his career in 2020 after securing a deal to drive a Hyundai i20 R5 in the 2020 British Rally Championship backed by Motorsport Ireland, Sport-Ireland and the Motorsport Ireland Rally Academy.

With support from Hyundai Motorsport Customer Racing, the reigning Junior British Rally Champion will embark on a full campaign in the six-round series, marking his first season behind the wheel of a four-wheel-drive machine. The Hyundai will be run by Philip Case Rally Sport with regular co-driver Keaton Williams returning to the passenger seat.

McErlean, 20 from Kilrea in Co. Derry has enjoyed a rapid rise into the latest R5 category after securing the Junior British Rally Championship title in 2019. Three wins and two fourth places in his Woodland NI backed Peugeot 208 R2 secured him victory with one round to spare.

His reward was a supported drive on Britain’s round of the FIA World Rally Championship [WRC], Wales Rally GB, backed by the British Rally Championship [BRC] and Hyundai Motorsport Customer Racing. Despite making his WRC debut, McErlean set a string of impressive times before being forced to retire.

A further outing came in December when he was offered the opportunity to contest the iconic Monza Rally Show in Italy, once again in a Hyundai i20 R5. In a star-studded entry list, McErlean finished an impressive 18th overall and third spot in the hotly contested Hyundai i20 R5 Trophy.

His season was rounded off by winning the coveted Billy Coleman Award for the Motorsport Ireland Young Rally Driver of the Year after being nominated for his performances from January to April. This prestigious accolade has netted the youngster support to the value of €100,000 towards his 2020 season and McErlean will use the funding for his British Championship campaign.

“Competing at the forefront of the British Rally Championship has always been a dream of mine and to finally get the opportunity to do so is really something quite special,” says McErlean.

“After winning the Junior title, this really is the next step forward in my career and now that we have major support from Motorsport Ireland, I have opportunities available to me that I could only daydream of before. I must keep my career moving forward and the chance of doing the full BRC in a Hyundai is priceless“.

The Kilrea ace has honed his craft in the sport from a young age, sealing the F1000 British and Northern Ireland titles before stepping into a Citroen C2R2 Max and the Junior BRC the following year. McErlean enjoyed some giant-killing results in the outdated Citroen, whilst the switch to the Peugeot 208 R2 brought most success.

His outings in the Hyundai saw McErlean’s raw pace come to the fore and despite his lack of experience in four-wheel-drive machinery, he feels he is ready to take on the British Championship.

“We achieved so much in 2019 and I really was able to learn so much about myself and the sport, but this is like a whole new start for me” he continues.

“It’s another huge step in my career but I mustn’t stand still, I have to keep improving and gaining experience with every stage mile. Of course, I have one eye on the future and that forms a huge part of this plan for me and although Keaton and I are one of the youngest crews to compete in an R5 at this level, we have already been in this situation so are aware what we need to do to deal with it”.

McErlean’s aim this season is for a measured approach.

“There are many people involved in supporting this campaign and I am in such a privileged position, so I have to be smart and not get carried away. Solid finishes are the main aim of this season, but it would be great to get some good results under our belt too. I’m relishing the challenges that lay ahead and the start line of the Cambrian [Rally] is all that I am waiting for now”.

The British Rally Championship consists of six rounds, two gravel and four asphalt, with the season kicking off at the Cambrian Rally in the North Wales forests in February. 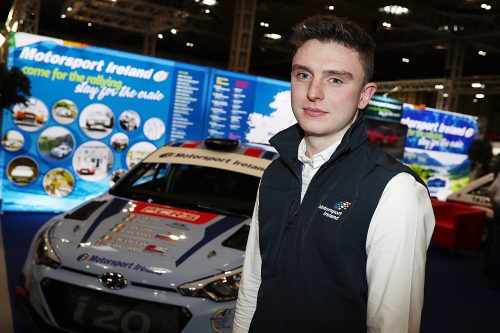