The Harper Adams University Rally Team return to the Prestone MSA British Rally Championship after missing the Scottish Rally due to exam clashes. With the end of term behind them, the team is back in action in Britain’s premier rallying series.

Driver James McDiramid and co-driver Max Haines-Messenger are the crew tasked with piloting the Ford Fiesta National through Britain’s toughest stages. When they are not pulling handbrakes, calling pacenotes and burying the throttle, the pair form part of an all-student team who are balancing their rallying commitments with their university work.

The team can be delighted with their 2017 form as McDiramid and Haines-Messenger have guided the Fiesta to two Cadet Cup podiums in their first two events. We spoke to James about the season so far.

“After announcing the project at the Autosport Show we got the car back from the paint shop a few weeks later. It was then a race against time to get everything done in time for round one. We had all built cars before but nothing of this magnitude and to this specification. We finished the car the day before the Border Counties Rally and the paint was touch dry as we made the trip to Scotland.

“Our aim was to just finish after all the hard work and crossing the finish line was the most important thing. To take a third was better than we could have ever expected. The car was faultless and really shows how well M-Sport designed it and how well we built it. It’s a real testament to everyone in the team as nothing went wrong all weekend.”

McDiramid has a good amount of experience in the navigators seat but when it came to driving, his experience was relatively limited heading into one of the toughest national championships in the world.

“I was really pleased with my own performance as I am not going to lie my rallying experience behind the wheel is limited, so it was a real leap of faith for the team and they were probably more nervous than I was to say the least. I was faster than I thought. It would be great to build on our pace heading into Ypres.“

The University-run team has technical support from rallying powerhouse M-Sport but are showing great ingenuity themselves as they showcase their own talents. McDirmid explains that their is positive attitude from his classroom peers.

“We were gutted to miss the Scottish Rally but our degrees have to come first. Now our exams are over our focus is on the rest of the year. It’s going to be tough the next few months. We all have summer jobs all around the UK from Scotland down to Dover which will make it difficult to prepare the car at times but we are fully committed to the project and we hope to be at all the remaining rounds this year picking up more strong results.”

Proving that university life is more than reading, note taking and partying – the Harper Adams cohort are using the BRC as an important case study.

“The BRC is the perfect platform for us to compete in and last year when we were planning there was no question as to where we should compete. What we learn at Harper Adams theoretically can be transferred and applied straight onto the Fiesta which makes it brilliant real life experience for us, especially to compete in the BRC – the pinnacle of UK rallying.”

The University challenge continues next weekend on the famous Ypres Rally 23/24 June. 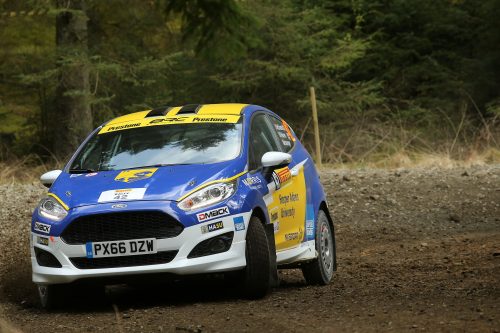