McCormack from Draperstown, fought back from 20th overall and eighth BRC on the opening stage to just miss out on a podium spot in the TigerRisk Skoda Fabia R5 despite the treacherous weather which greeted the 160 crews in the south-west corner of Ireland.

His third place at the season-opening Cambrian Rally in February, along with his fourth in West Cork, now means the rapid Northern Irishman is second overall in the BRC points standings in his first full season in the championship since 2017.

Co-driven by Barney Mitchell, McCormack would head to the Clonakilty based event with renewed confidence after his Welsh podium just four weeks ago. The event would mark a shift from gravel to Tarmac and with it, a two-day blast around the closed public roads hugging the Irish coastline.

The BRC crews would compete alongside the Irish Tarmac Rally Championship on the event, offering one of the most impressive line-ups’ of R5 machinery seen for many years.

Over 200 kilometres and fifteen stages lay ahead during the weekend and if the event wasn’t tough enough, a storm front from the Atlantic would bring driving winds and rain to the region as the rally kicked off on Saturday morning.

Nine stages were on offer on the opening day and it would need a cautious approach to deal with large amounts of standing water and subsequent mud strewn roads. But McCormack’s start was blighted by an opening stage stoppage caused by a previous car blocking the road.

His notional time that was awarded on the famous “Ring” test saw him well down the leader board and the Skoda driver would need to fight back over the next eight tests of the day to regain the lost time.

Fight he did. You’d have to look back to August last year to find his last outing on asphalt in the Tiger Risk Fabia and as the weather began to improve, McCormack’s confidence began to build. Second quickest BRC time over the 14.6-kilometre Dunworley test saw him climb to fifth and a further hattrick of top three times saw him climb to fourth spot at the end of the opening day.

Aware that a solid points haul would put him in a prime overall BRC position, McCormack headed into the second day with the aim of scooping a solid result in the Pirelli shod machine. Staying out of trouble would be harder than it appeared as the dry conditions lifted the speeds but also the chances of mistakes.

However, he and co-driver Mitchell kept their nerve throughout the six stages of the day to head back to the Clonakilty finish ninth overall and fourth BRC.

“I’m really pleased with that result and when you just look at the conditions, we have faced this weekend it could have really gone any way at all for us,” said McCormack at the finish.

“One small mistake would have ended the rally as these roads are really not forgiving at all. So, we knew we needed to find a pace that we were comfortable with this weekend and make it to the end and grab the points for the championship.

“It’s a long year so getting a score on the board early on is a real confidence boost. Second in the British Championship is a great place to be but we need to maintain that momentum going into round three next month. It’s going to be a big battle that’s for sure”.

The third round of the British Rally Championship takes place in Carlisle at the end of April with a full day of rallying in the Kielder Forest complex on offer at the Pirelli International Rally. 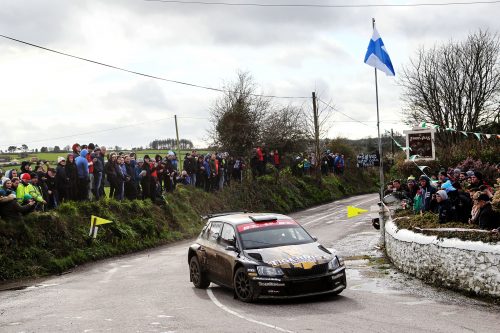