McCormack on the prowl for BRC success

Marty McCormack will return to the Prestone MSA British Rally Championship in 2018 with David Moynihan in the co-drivers seat in the striking Tiger Risk Rally Team Skoda Fabia R5.

McCormack is one of the first drivers to register for Britain’s premier rally series after a strong 2017 as the Ulsterman claimed three podiums on his way to sixth in last seasons standings. With a long winter break out of the way, the 32-year-old is already fired up ahead of the 2018 calendar.

“We did the championship last year and really enjoyed the events, so it was a natural decision to return to the BRC in 2018,” explained McCormack. “I loved the Borders last year. “The line-up of drivers and cars was electric and the atmosphere got the championship off to a great start.”

After back-to-back podiums on the Pirelli and Scottish Rallies, McCormack started as one of the favourites for the Ypres Rally, after several stellar performances previously. Marty’s massive Flanders roll was the only blot on his copybook last year as the Irishman bounced back to take fourth on the Nicky Grist and a hard fought podium on home soil, on the Ulster.

“We were there or there about last year as we punched in several fastest stage times. We were pleased with our gravel pace but I expected to do better on the Tarmac events. The accident in Ypres didn’t help us but that is the biggest area we want to address for this year. We want to return stronger and to fight at the very front. I haven’t been in the car since the Ulster last year so will need an event or two to get back onto the pace.”

Consistency will be the key going into his second year in R5 machinery as McCormack is set to be run by Dom Buckley Motorsport throughout the season as he sets about adding more podiums and his first BRC win to his already impressive rallying CV. 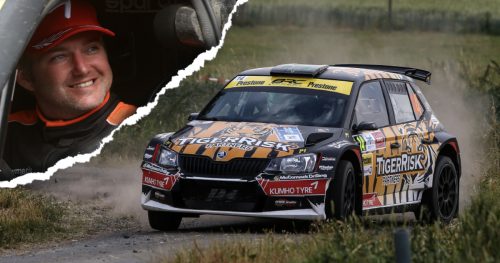