After a star-studded Ceremonial Start in Lisburn city centre last night, the Circuit of Ireland got off to a dramatic start on the Northern Ireland stages.

First car on the road was Elfyn Evans and Craig Parry who mastered the conditions on the opening test, Cairncastle this morning. The Welsh duo pulled a 6.4 second lead over 2015 winners Craig Breen and Scott Martin. The lead doubled after Stage 2, Knockboy 1 but Evans was sheepish as he pulled up to the end of the stage stop-line, believing he had a power steering problem. On the following test the lead DMACK Fiesta retired with the auxiliary belt letting go. The DMACK team have fixed the car and Evans will start tomorrow.

The leading BRC crew honour then should have fallen to Desi Henry but he too retired on the tough 31.21km Glen stage which uses the iconic Torr Head on the north-eastern tip of the country. The two front-runners demise led to a ding-dong battle between Marty McCormack (Skoda S2000) and Fredrik Ahlin (Ford Fiesta R5) for the top spot. Local hero McCormack drew blood on the first stage before Ahlin closed the gap on the second. The Swedish star was in a determined mood as he was the quickest BRC runner over the infamous Glen, Torr Head challenge to match McCormack on times going into the midday regroup.

Ahlin who had never driven a four-wheel-drive car on Tarmac before was in an inspired mood and eked out a slender 0.1 second advantage on stage four before another 2.5 on stage five. Drama was to prevail on the final stage of the day, a short 2.3km spectator stage in the town of Newtownards. Ahlin made contact with a roadside curb, knocking the tracking out on his Fiesta R5. Undeterred the street-fighting Swede limped the car back to the Service Park, dropping 23 seconds to McCormack – putting him third at the overnight halt.

Josh Moffett despite running further down the running order had a strong morning to lie second in his Fiesta while David Bogie who managed to repair his Skoda Fabia R5 after an excursion on the qualifying stage yesterday is in a solid fourth. Josh’s brother Sam had a difficult start to the day, complaining of clutch issues. Soldiering on, Sam nestles his Fiesta R5 into the top five going into the second day.

The highest placed Citroen DS3 R5 is that of Jonathan Greer in sixth while stable mate Keith Cronin retired after an off on stage one this morning. Cronin damaged the radiator and won’t be restarting tomorrow. Euan Thorbrn in the sole Peugeot 208 T16 had a troubled day and has also called time on his weekend as the Scotsman’s differential cried enough.

Ollie Mellors who opted to run in the National field is running well in his SORT Oil backed Proton Satria S2000.

In the DMACK Junior BRC it has been a battle of attrition as competitors have fallen by the wayside. Robert Duggan and Mattias Adielson have a one-two for the Vauxhall Motorsport Junior Rally Team while Umberto Accornero holds third in his Ford Fiesta. Nabila Tejpar has had a solid event gaining experience with every stage mile in fourth.

BRC2 is held by Patrick O’Brien in his Mitsubishi Evo 9 while in the National Rally Cup Donnie Macdonald has a comfortable cushion over Mirage driver Jamie Jukes.

Callum Devine was a late registration for the Circuit of Ireland competing in the BRC4 category. The Irishman was running well until transmission failure resulted in a nearly retirement.

Quotes from the opening day on the Circuit of Ireland:

“The first stage was dry and we had a good feeling with the Kumho tyres and felt very confident in the car. The car was a bit soft for Torr Head so we lost a bit of time there. We are really happy with the times and the run we had this afternoon on the slippy stages.

“We have to do the same again tomorrow. In the older S2000 car we have to chip away and keep doing what we are doing and not get too involved in tactics.”

The roads were a bit dirty for us in many places and we probably dropped a lot of time but it wasn’t as bad as what we thought it would be. We are happy with the day apart from the last stage (stage 6) as we stalled in a chicane. Luckily we didn’t lose too much time. The stages will suit us tomorrow and we want to take the fight to Marty and push on.

“We missed a shiny bit of Tarmac in a hairpin.I went in and pulled the handbrake and just lost the rear. There was a curb there which wasn’t in my notes. It’s one of those things, it is the first time we missed a surface change. The boys are going to fix the car and we may have to take a time penalty to repair everything. We are here to learn and we will go for it again tomorrow.“ 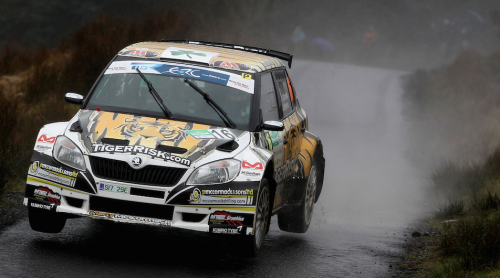