McCormack: I’m here to enjoy myself

The entertaining Marty McCormack launched his 2019 British Rally Championship plans this evening (4 February) and will return to the top flight of Britain’s premier rallying series in his Skoda Fabia R5 – but he has made a few changes in the off-season.

McCormack will start his fourth consecutive season in the BRC in a Czech machine and will be looking to challenge at the very front after a disappointing campaign by his very high standards in 2018. For Marty, the spiced-up calendar in 2019 was massive a draw.

“For me, the calendar is more refined with a good mix of events, and having Ypres in the middle of the season is the jewel in the crown – I love that rally,” enthused the Northern Irishman. “It’s very simple for me to come back again; the BRC is well run and publicised with great events and good competition – it’s enjoyable and I couldn’t be kept away.”

The man from Draperstown revels on the Belgian Tarmac, and Ypres rally fans took him into their hearts during his spirited drive to eighth overall in an S2000 car back in 2015. Since then, luck hasn’t gone the way of the Irishman with two subsequent retirements. Third time lucky in 2019?

“Who knows! You can never tell with Ypres. It’s a tough rally, but when you get it right it’s very special. I am delighted to have Tiger Risk back on-board for 2019 and the event is special to them, so we will be taking two cars across for that one to do a fun day for them afterwards. Last year, we had a diff problem with the R5 car – it just kept spinning off. We didn’t realise the extent of the problem as it carried over to the Ulster Rally, which was a massive shame.”

Speaking of the Ulster, Marty always knocks on the door of BRC podiums on home soil. What does the 33-year-old think of the latest Irish event?

“I think having two rallies this side of the water was a natural way forward as it helps a lot of the Irish guys to sit up and take note. Cork is a great event – I have done it a few times. It has a great atmosphere, good people running it and is a great place to go rallying – and going up against the Irish Tarmac Championship guys always adds a bit of spice!”

Marty will be tackling the new season with a new co-driver, as Barney Mitchell dons the Tiger Risk overalls for the year ahead.

“I would like to take this opportunity to thank David [Moynihan] for being a top-notch co-driver over the years. Unfortunately, he has had to take a step back and focus on his work commitments. I fully understand that, as I have had to do it myself previously. Barney and I go way back and we have had some great times in the past as he used to do my gravel notes. We did the WRC round in Australia in the Escort and won the last RAC Rally together, so it was only natural to continue that relationship into the BRC. He is great co-driver, very smart and has a good idea on set-up and detail so I look forward to working with him and to building that relationship further.”

The last question every driver gets asked – what are the hopes for the new season? Title, wins, podiums or points? For Marty, it’s a different take on proceedings.

“You know what, this year I am so relaxed about the season. Usually I get all-wound up over results and targets, but I have none of that this year. I am very fortunate to have the car and abilty to go and do these top events, so I just want to enjoy it. I really appreciate what I am able to do as when I was younger I always looked up to the top guys and desperately wanted to drive a big car. Now that I do, I have to savour it and I get so much joy from it that results actually don’t matter completely. I am out for a bloody good time this year!” 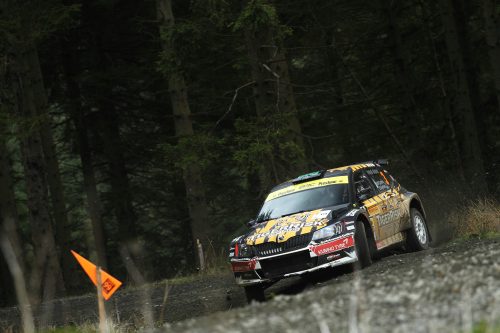