Matt Edwards is ‘living the dream’

BRC2 Champion Matt Edwards has had a stellar 2016 with many high points in his title-winning year. The north Wales-based driver began the season in his own self-built Mitsubishi Evo 9 and performed miracles behind the wheel of his showroom specification machine – outpacing more technically advanced cars at every opportunity.

With Will Rogers sat alongside, Matt started his campaign in the tough and tricky conditions of the Mid Wales Stages. With the paint barely dry on his Mitsubishi, the DMACK-supported driver threw his BRC2 weapon through the forests to claim an incredible seventh overall, leaving many R5 machines in his wake.

“The highlight of the season had to be the first couple of stages on the mid Wales event,” explained Edwards. “I almost single-handedly built the Evo 9 and it was a lot of hard work but I wanted to step up to the BRC. To prepare the car as well as balancing work and family life was demanding, but to see the stage times on the first day was incredible and it made everything worthwhile. I was actually quite surprised. I wanted to stay inside our seeding, so to come seventh was amazing. More importantly, the car didn’t miss a beat and was very reliable, making it so much easier to push on and gain a good result.”

Edwards’ form has been impressive throughout, with the only blot on his copybook being a day one mechanical retirement on the Circuit of Ireland. Since then, the 31-year-old has notched up win after win to clinch the BRC2 crown early on the mixed-surface Nicky Grist Stages back in July.

With the title firmly secured, during the summer break, the high-flying Edwards secured a drive in an R5-specification Ford Fiesta for the final two rounds of the season, with a full campaign on the horizon in 2017.

So how did the Swift Rally Team driver get on in his new office on the Ulster Rally?

“It was a dream come true to drive the Fiesta,” he enthused. “I just want to spend every minute in the car! The transition from the Evo 9 was actually quite tricky, especially to learn everything on the event,as we had no testing beforehand. Will [Rogers] and I were too cautious on the recce as the R5 is capable of so much. I can brake later, accelerate earlier and carry the speed through the corners. I need to trust the car as it can be pushed very hard. I can’t complain too much as it was a joy to drive. It just put a smile on my face! I am so grateful to the Swift Group for the support and backing throughout my career. This opportunity after 12 years of hard graft is something I will be grabbing and giving my all.”

The final round of Britain’s premier rallying series concludes on the Isle of Man this weekend (15-17 September). The Manx event is a favourite for Edwards and he will be pushing for another top ten result once again, picking up knowledge and data throughout the three-day classic. 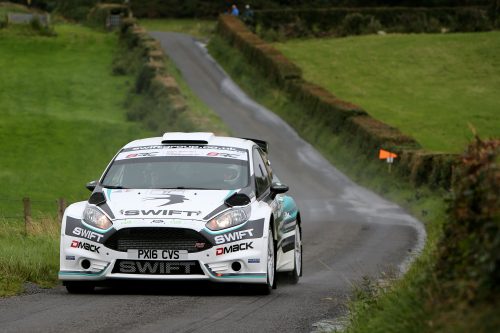