So far this year, the BRC has seen 12 crews sign up to take on Britain’s premier rallying series. Here is their half term report after three rounds.

Leading the way after the Pirelli Carlisle Rally is the Scottish duo of Donnie Macdonald and Andrew Falconer in their potent Mitsubishi Evo 9. After a difficult start on the Mid Wales Stages in March, the Inverness pairing got their act together and took the spoils on the Circuit of Ireland. Donnie had also played his ‘Joker’ meaning he doubled his points haul across the Irish Sea. Back on mainland Britain, the crew repeated the feat by chalking up another BRC NRC win, this time on the Pirelli Carlisle Rally in Cumbria. With a tally of 83 points, Macdonald has a firm grip on the championship standings heading to his home event, the Scottish Rally.

On the opening round in Mid Wales, all eyes were on one of Britain’s up-and -coming stars, Osian Pryce and co-driver Dale Furniss. The pair have previous BRC pedigree having finished second overall in the series in both 2013 and 2014 driving a Citroen DS3 R3. For 2016, the Welsh duo were tasked with a new challenge as they harnessed the exciting Mitsubishi Mirage with the sole aim of gaining maximum NRC points and show the speed of the car against the established R5 machines.

Pryce duly delivered, and with his ‘Joker’ marched away from his home event with a full house –50 points from a possible 50 and with it the interim championship lead until Madonald won on round two. Currently this is the only round the Welshman is set to compete in, in 2016 as he focuses on his World Rally Championship commitments. However, don’t write off Osian returning to the series in one form or another as the bug has well and truly bitten.

The project, run by Spencer Sport alongside Mpart and Tomas Weng in Sweden, is working hard on FIA homologation for the car but until then the car makes its home in the National Rally Cup. Two further Mirage’s have graced the championship with Robert Blomerg and Jamie Jukes on driving duties.
Blomberg and Lars Andersson from Sweden have shown great speed in the first three rounds having taken two second places in Wales and Carlisle. Blomberg has yet to play his ‘Joker’ and along with Jukes they are Macdonald’s biggest title threats.

Jukes and David Williams in the Spencer Sport Mirage have seen their pace increase as the season has developed, taking a fine second overall on the challenging Circuit of Ireland last month. Watch out for Jukes as the Welshman also has the ‘Joker’ in his back pocket ready to spring on the series later in the year.

Lee Hastings and Julie McGuire are the leading non-Mitsubishi runners in the National Rally Cup in their Subaru Impreza. The Scottish pair had a rally-ending shunt on the Mid Wales Stages, but undeterred the duo got back in the seats and took a fine third on the Circuit of Ireland in their Tarmac specification Impreza. The iconic flat-four machine is a welcome addition to the championship and in the hands of Hastings, the Japanese machine took a further handful of points on the Pirelli Carlisle. With the ‘Joker’ still to play the pair could be in the hunt by the season end.

Daniel Shadlock took a giant-killing podium on the Mid Wales Stages in a Peugeot 206 and we hope to see him and co-driver Rob Fagg back in BRC action soon. John Morrison and Peter Carstairs made their BRC bow on the Circuit of Ireland. The pair didn’t have the luck of the Irish as they walked away from the Belfast event with no points. The pair returned to the series with their head held high on the Pirelli Carlisle and took a haul of points with a fine third in their Mitsubishi Evo 9.

Nigel Fennery and Abi Louden in their striking Subaru Impreza made their BRC debut on the third round of the series. Putting in a strong drive, they walked away with a fine fourth place, kick-starting their season ahead of their home round next time out. David Ashburn and Jonny Evans in a Mitsubishi Evo 9 also opened their account in mid Wales and we hope to see the duo return to the BRC stages later in the season.

David Bennett and Alistair McNeil in their Vauxhall Corsa and Thaarique Fazal and Amanda Burney in their Vauxhall Nova are all growing with confidence after every event and are on the cusp of scoring their first BRC points. The Scottish Rally will hopefully be a happy hunting ground for the quartet next time out.

Recent additions to the BRC family, Chris Hellings and Glyn Thomas in their MG ZR are set to join the BRC NRC fray later in the season. 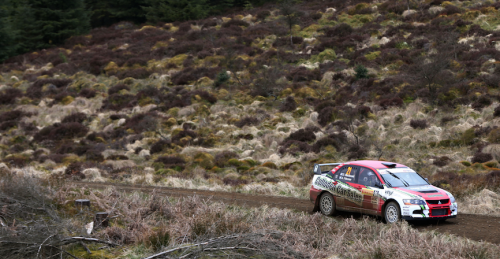