Macdonald out to make national headlines

Inverness-based driver Donnie Macdonald returns to the Prestone MSA British Rally Championship with an assault on the National Rally Cup lined-up for 2017. The Scottish driver came close to the title last year and this year is out to make amends as he guns for NRC glory – hoping to stretch his smile even further in the process.

“I loved the BRC last year – It was so much fun,” enthused Macdonald. “Robert [Blomberg] and Lars [Anderson] are great guys and we had a good fight with them all year. Yes, the competitive element was there but the people made it for us. The windups and camaraderie was fantastic and the events were great – it made it all so enjoyable. People should have no hesitation to come and give it a go – no matter what car you have!”

Donnie was a force to be reckoned with in 2016 aboard his Mitsubishi Lancer Evo 9, claiming three wins in the NRC along with a podium on home-turf on the Scottish Rally. Two disappointing retirements on the Nicky Grist Stages and the Ulster Rally put Macdondald on the back foot heading to the season finale. The Evo 9 driver did all he could and blazed a trail to win the NRC class.

The Scot in his Japanese machine performed a stunning display to put himself in the top 10 overall on the Manx International event. Unfortunately, it was not enough. Despite finishing 16 places apart on the leader board, Robert Blomberg in his Mitsubishi Mirage was the second NRC driver home and therefore lifted the trophy.

“If we didn’t have the retirements, it would have been a lot closer in the title fight come the Manx. But now it’s a new year and new challenge. This year I‘m back to enjoy myself again and hopefully this time I can take the title.”

Macdonald has a new mount lined-up for the opening three events as he is set to use a right-hand-drive Ford Fiesta R5 before a possible switch to his trusted Evo 9 for the Tarmac events later in the year.

“Driving the Fiesta R5 is a fantastic experience and is night and day compared to the Lancer. The handling and chassis is just superb. I will be doing the first three BRC rounds in the Fiesta and after that we will see where we are as regards to the Scottish Rally Championship and BRC. The Evo is amazing on Tarmac and we can really be mixing it in the top 10 overall on the asphalt so hopefully we will give that a few runs at the end of the year.”

The exciting National Rally Cup is open to all cars with a current MSA Car Log Book. In your rally car you can compete on the exact same route as the homologated cars. The only difference is that you do not get to partake in reconnaissance on the gravel rounds in advance of the rally. However, crews can use route notes authorised by an event approved provider. 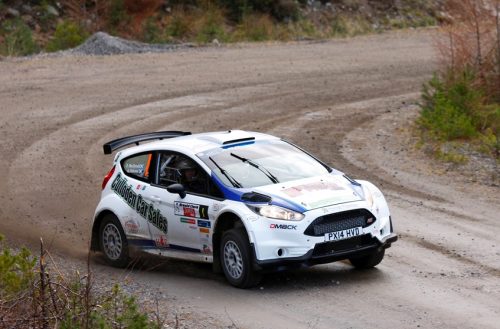