While most drivers will be fighting it out on the Pirelli International one-day fast and furious sprint, Alan Carmichael will be tackling a marathon – quite literally as the Northern Irishman will be taking on the London Marathon.

One of the latest BRC recruits has had a roller coaster of a season to date. A tough Cambrian Rally saw the Hyundai i20 driver plagued by wiring loom gremlins, but a promising showing on the West Cork round saw Carmichael bag his first points to put him tenth in the overall standings.

“I am really enjoying the BRC so far,” said Carmichael. “The Cambrian was disappointing but the stages we did were amazing. In West Cork we were dogged by bad seeding on the first day and on the second day we had a lot of time to make up and it was all about getting a good finish. I have done some events in the Northern Ireland championship and my times are not a million miles away from the likes of Desi Henry and Callum Devine, so if I have a good run I think we can press on for a good result on our next BRC round.”

Carmichael’s progression will have to take a back seat as the PCRS Rallysport team driver will miss the Pirelli International as he gears up for the London Marathon. Alan tells us how the road to the capital began.

“It all started 11 years ago, actually on the Pirelli itself. I used to smoke and it was on that event I decided to literally throw the packet away. My day job means I am on my bum most of the time – in an office or on the road. I wasn’t as fit as I wanted to be so three years ago I started to get into running and I did my first half marathon. I did that first event and thought – why do people do this! But like rallying it’s like a bug, I wanted to do more and my wife also took up the challenge. My next goal was the London Marathon. I took part last year in the heat and for five miles there was no water at any of the stations and I really struggled, but I was happy to just get to the end. I did it in seven hours and afterwards I did think – never again, but the competitor in me signed-up for another year and have been training like mad in preparation.

“I would like to beat my time from last year but the main priority is to raise as much as I can for CLIC Sargent. It’s a great charity and we have all been effected by cancer in some form or another, so I am pleased to be representing and running for them this year.”

We wish Alan the very best for his run. If you would like to donate click his donation page here. 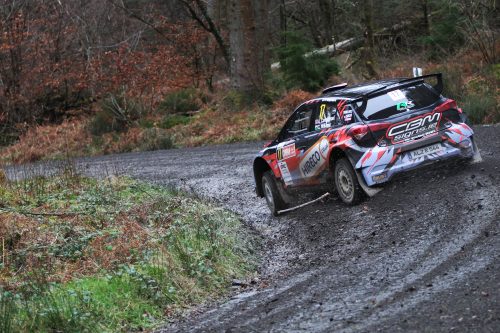