The Prestone MSA British Rally Championship races into the second half of the season with Wales the next stop on the action-packed calendar. Next weekend the demanding Nicky Grist Stages (8/9 July) will play host to round five of Britain’s premier rallying series.

Where are we going? – Round 5 – Nicky Grist Stages

The Builth Wells-based event will welcome the fastest rallying crews in the country to some of the finest stages in British rallying. The action commences with a Ceremonial Start in Builth Wells town centre on Saturday morning before a day-long battle on eight gravel tests previously used on Wales Rally GB.

An overnight service halt at the Royal Welsh Showground will then see teams’ engineers and mechanics have just two and a half hours to transform their state-of-the-art rallying machines from gravel spitting monsters to Tarmac-hugging race cars for the second day of action.

Having had their cars switched from gravel to asphalt specifications, crews will then speed over the Epynt Military Ranges. The famous ribbon of Tarmac will favour the brave as the rally could be won or lost on the legendary stages. After 117 grueling miles across the two days, the victors will spray the champagne back at Groe Park with the picturesque 18th-century bridge running over the River Wye providing the Ceremonial Finish backdrop on Sunday afternoon.

A strong crowd is expected across the weekend with highlights from the rally being broadcast around the world via Channel 4, BT Sport and Motorsport TV network shortly afterwards.

Last time out – Round 4 – Ypres Rally

The Prestone MSA British Rally Championship visited Ypres in northern Belgium for the first overseas round in the championship’s 59-year history and the event certainly didn’t disappoint.

Multiple BRC champion Keith Cronin took his first win of the season for M-Sport with fellow Irishman Mikie Galvin in the co-driver’s seat.  The M-Sport Ford Fiesta R5 pairing became the third different crew to win a round this season, thus putting their championship assault back on track.

Matt Edwards and Darren Garrod (Fiesta R5) kept their noses clean all weekend to become the seventh different crew on the rostrum this season, claiming second – their best ever result in the BRC, adding them to the title race. Osian Pryce and Dale Furniss had a difficult weekend as they struggled to find the set-up sweet spot with their Fiesta R5. Even so, Pryce and Furniss finished third on the Belgian event, shifting the balance of power to lead the championship heading to their home rally.

Fredrik Ahlin and Torstien Eriksen (Skoda Fabia R5) who won the first two rounds, retired on the opening day in Ypres. The Scandinavian pair restarted the second day and worked their way up to the order to take sixth in the BRC and with it a handful of points to keep their title tilt on track.  Scottish Rally winner David Bogie with new co-driver Andrew Roughead crashed out of the event on the second stage and could sit out the next round while the Fabia R5 is repaired and returned to its former glory.

In the Prestone Motorsport News Junior BRC, Callum Devine and Keith Moriarty became the fourth different winners in the class for drivers under the age of 26 driving front-wheel-drive pocket-rockets. The Irish crew in their Opel ADAM R2 finished ahead of championship leaders William Creighton and Liam Regan while podium debutants James Williams and Dai Roberts took the final step and became the eighth different Junior crew to taste champagne in 2017.

Osian Pryce comes to his home event, the Nicky Grist Stages, as the overall championship leader. Pryce, who is dovetailing his BRC campaign with World Championship outings, sits pretty at the top of the championship table. The man from Machynlleth took his fourth consecutive podium and will be gunning for the top spot in front of his home fans. Continuing the local theme, Pryce’s team Spencer Sport from Ceredigion would love its man to better the outfit’s second place on last year’s event.

Matt Edwards from Colwyn Bay wrapped up the BRC2 category on the event in 2016 in his Mitsubishi Evo9. A year on, Edwards returns to his home round with a top-flight four-wheel-drive Ford Fiesta R5 and will be eager to move up the championship order from his current position of fifth and stand on the podium once again.

Although not from Wales, two drivers to watch out for on the Nicky Grist Stages are Jamie Anderson and Rhys Yates driving Ford Fiesta R5’s. Anderson from Leicestershire goes well on the Welsh stages and a former Mid Wales Stages and Severn Valley Rally winner took a BRC career best fourth in Ypres and will be hunting his maiden podium in Britain’s premier rallying series.

Yates is also man on a mission after a fine fifth in Belgium. The driver from Derbyshire is eager to progress and better his seventh overall on last years event. The young-gun is accomplished on both surfaces and could spring a surprise to help move him from eighth in the series standings.

In the Prestone Motorsport News Junior BRC two young Welsh charges will be seeking success on their home patch. James Williams from Newcastle Emlyn in his Ford Fiesta R2T rides on a crest of a wave after his Belgian class podium –hopefully the first of many for the Spencer Sport driver. Fighting tooth and nail for Welsh supremacy will be Meirion Evans in his Peugeot 208 R2. The Lampeter-based driver has two podiums under his belt already this season and will throw everything at the event to secure his first win.

World Mountain Bike Champion Gee Atherton returns to Britain’s premier rallying series after a three round absence due to an injury experienced in his two-wheeled day job. The man from north Wales campaigns his Ford Fiesta R2T in BRC4 and will want to wrestle the championship lead back from rival David White.

For more information on the Nicky Grist Stages visit www.nickygriststages.co.uk

Keep tabs on all the latest BRC developments by visiting www.msabrc.com or following us on social media: Prestone MSA British Rally Championship on Facebook, Twitter and Instagram using #BRC 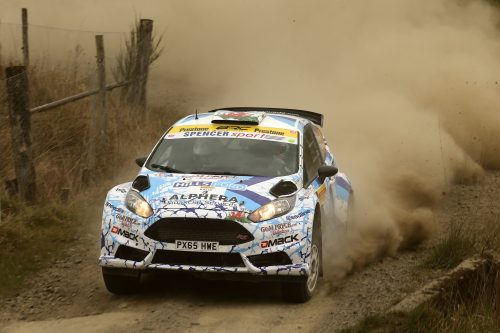